When we installed the fence last year we debated cutting the extra length on the posts down, but ultimately decided to leave them so I had a spot to hang bird feeders and other cutesy garden stuff.  It worked out pretty well, but I was never really keen on how the posts looked even with the decorative hooks.  It just felt unfinished.

Although I wasn’t 100% happy with the look it wasn’t a high priority, so I ignored it – until recently when I spotted these copper fence post caps.  I’d considered them last season, but when I researched them online they were much too pricey.  For some reason our local store had them for $4.95/each, so I snagged a few to test out.  I was pretty pleased with the result. 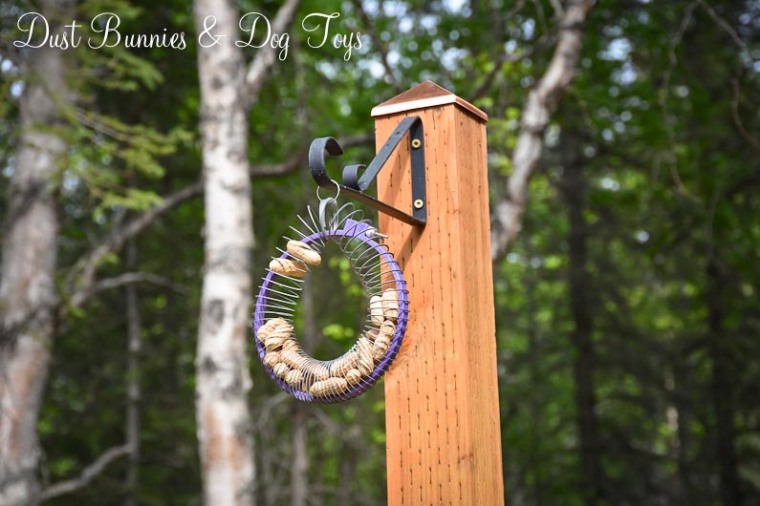 And installation was so simple.  You just set the cap on top of the post.  They recommend you use adhesive to permanently attach it, but I’m holding off on that until I decide if I want to leave them up all year or take them down for the winter so they don’t oxidize and patina as quickly.  (Notice the peanut feeder is half empty?  I moved it over a few posts to help the squirrels find it and now that they have, they are emptying it almost daily!)

The local store also had coordinating solar post cap lights, which I thought would look nice on either side of the back gate.  Although they were quite a bit more expensive than the basic caps, I think they were worth it and the hubs agreed.

They are definitely more decorative than functional as far as light output, but here in the land of midnight sun, that’s not really an issue during the seasons we’d be out using the gate anyway.  The hubs picked up enough caps and lights to finish the rest of the posts during a second trip to a different store, where the caps were on sale for $3.95/each!  Pretty and on sale.  Can’t beat that!