Our second day in Scotland was one of my favorite days of the entire trip, but it was a long one so I’m going to divide it over two posts.  We started the day at Edinburgh castle.  Driving in downtown Edinburgh is crazy and parking is downright insane.  After several loops around the castle on congested one-way roads we found a spot below the castle.  We paid at the parking kiosk and made our way up a large staircase to the Royal Mile a few blocks in front of the castle.

We were surprised to spot these iconic phone booths along the walk to the castle.  I’m not sure if they keep them just for the tourist attraction or if the locals still use them but they made me smile either way.

The crowds grew as we approached the main entrance to the castle.  This wide area is called the esplanade and was often used for large public gatherings and displays.  We made our way past the tour groups and headed inside.  As we waited in line to pay for our entrance tickets I took in the various textures of the inner wall, which showed the craftsmanship of those who had created it and the changes in material available as it had been built.

Once inside we stepped up along the walls to take in the view of the royal gardens below and the Firth of Forth beyond.  It was certainly impressive and a great vantage point to see the entire area.

The view toward the inside of the wall was pretty amazing too.  Because the castle had been built, rebuilt and added to over the centuries it’s now a combination of structures, each with their own purpose and look.

I’m a sucker for old world architecture and there was no shortage of that here.  The stone turrets on the corners of the walls were lovely and I marveled at the design skill it took to create them without modern day tools. 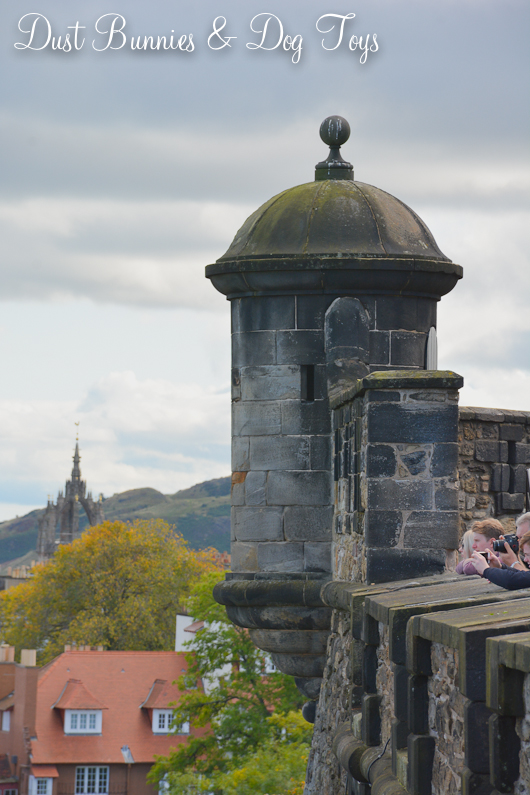 There was a row of small buildings that had been houses at some point, which were now a small cafe and gift shop.  There was so much texture and character every way I looked, especially in the smaller areas where the crowds weren’t filling the scene.  I felt like I’d landed in the pages of a story book and imagined the various scenes that likely played out in these very places. 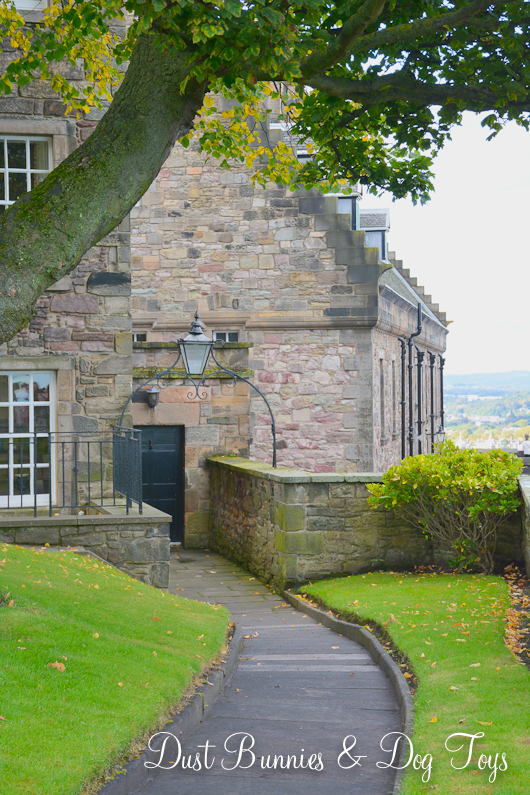 Several of the buildings are still in use for official purposes, including military head quarters and private residences for castle officials.

In one of the alleyways tucked behind these buildings I spotted this cool vintage work truck and wondered what they use it for now. 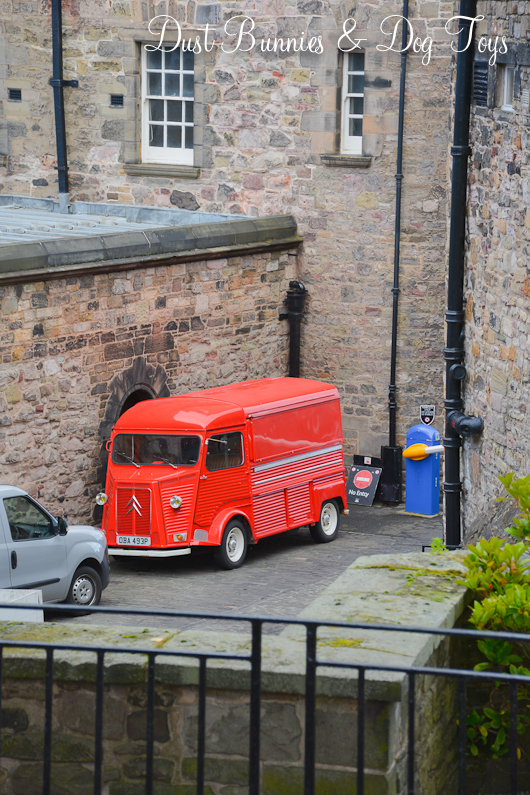 We toured the military displays which included medals from various campaigns, artifacts from the daily lives of the soldiers and their leaders in the Royal Scots Dragoon Guards regimental museum.  I also enjoyed the view of the historic homes below the castle from the windows in this area. 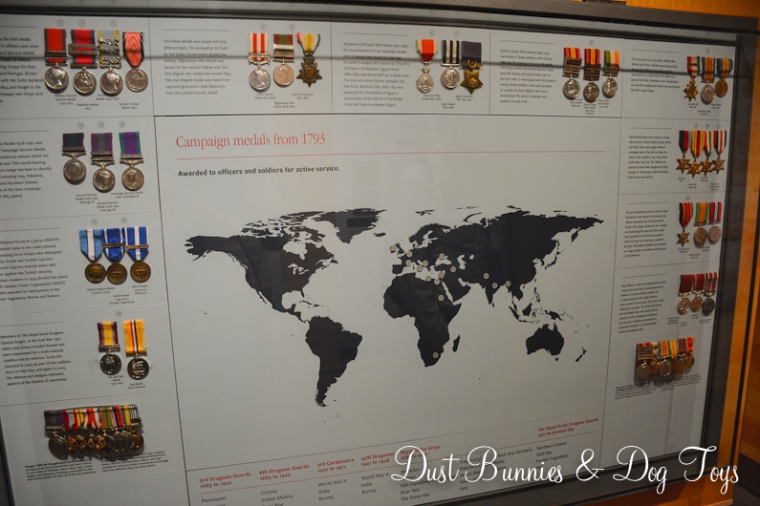 Next we toured the underground dungeon where prisoners were held during the various wars.  The extra lighting for tourists and my editing skills don’t paint the full picture of how depressing and dark this space must have been.  It certainly wasn’t the worst conditions but it wasn’t the most comfortable either.

Other areas of the prison had displays about how those held here would forge bank notes to pay off guards or for use if they escaped.   There were also several doors on display with carvings prisoners had created during their countless hours of time to kill to tell their stories.  It was the early version of graffiti.  Many prisoners also used their time creating hand-crafted artisan boxes and trinkets that they would sell to the guards and locals who came to the castle and when they were in the outdoor yards.

Back outside we wandered past several more buildings which included a war memorial and a small workshop that is now a retail space for the castle’s own brand of whiskey. 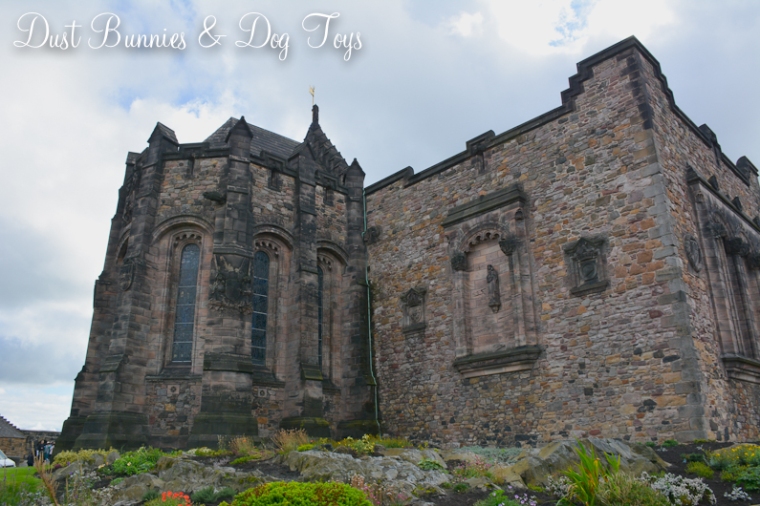 Then we headed into the main courtyard of the castle, which was flanked by the great hall, the Royal Palace which contains the royal apartments and the vault for the crown jewels and the stone of destiny which is used in coronation ceremonies for the monarchs of England.  The long line you see coming out of the tower with the clock was to see the jewels.  We did partake of that, but there are no photos allowed in that area for security reasons.

The arched doorway you see on the right of the clock tower led to Mary Queen of Scots royal apartments where her son, James VI was born. It was amazing to tour the spaces where so much history had occurred, especially a story line that has captivated generations and been retold in various ways.  Having watched several of the shows that depict Mary and her family’s role in Scottish history it was even more interesting to see where it had all really happened.  We saw the symbols of the lion and unicorn throughout the castle, which represent the United Kingdom.  The lion stands for England and the unicorn is for Scotland.

The great hall was an impressive structure indeed.  Built to showcase Scottish power and style it was used to impress visiting dignitaries and nobles.  The ceiling of the hall was built like the hull of a ship with massive beams that create an unique design.  The walls were decorated with various weaponry and armor and several of the windows had elaborate stained glass panels.  There was also a secret spy hole called the Laird’s lug where the King could see what was happening in the hall from above.  You can just make it out behind the light in the second picture. 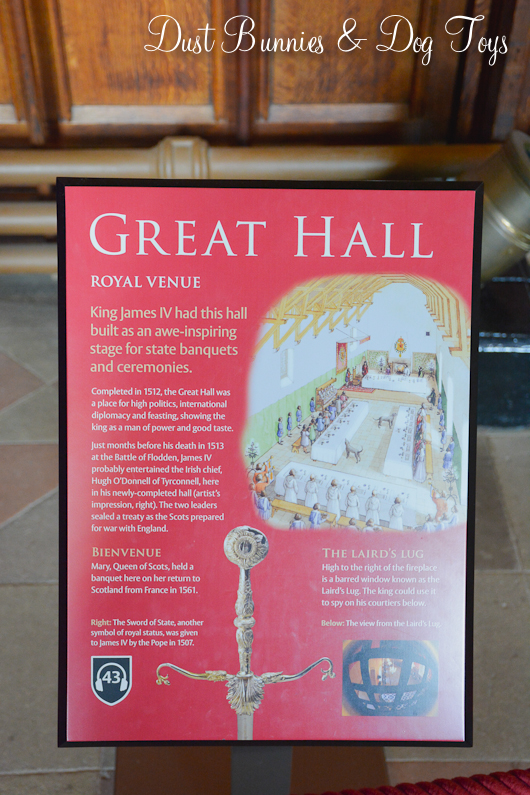 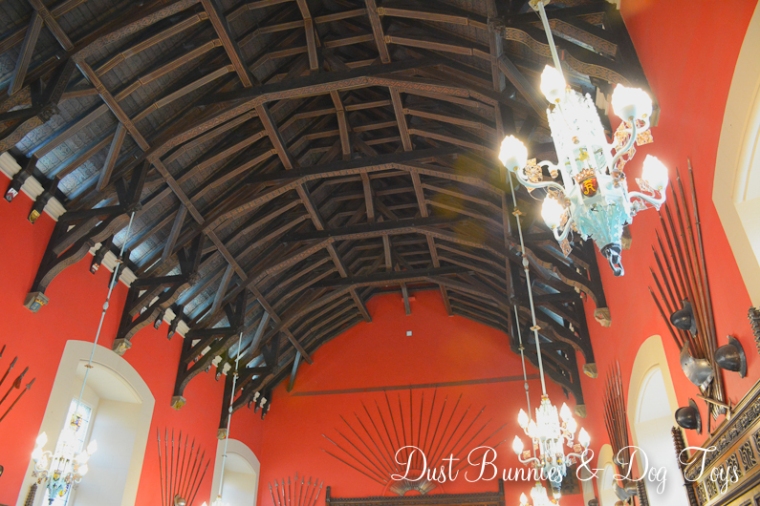 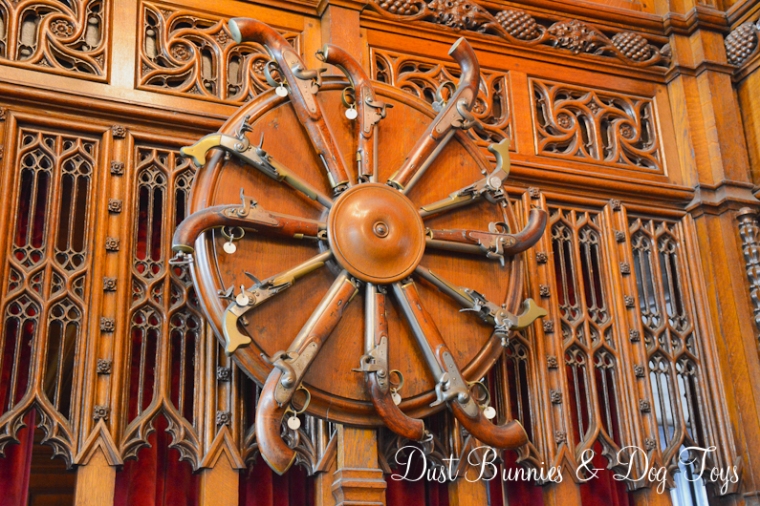 Nearby is the very small St Margaret’s Chapel, the oldest surviving building in Edinburgh.  It would only hold about 29-30 people at a time, so visitors took turns viewing the interior of the chapel where there was a small alter at the front and a few benches to line either wall.  Stained glass windows were installed when the chapel was restored in the 1920’s and depict four saints including Margaret herself (the closeup below) and the national hero, William Wallace. 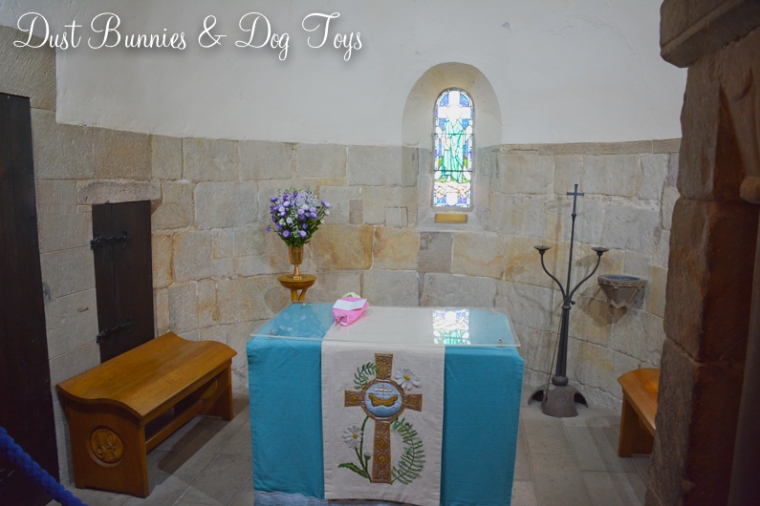 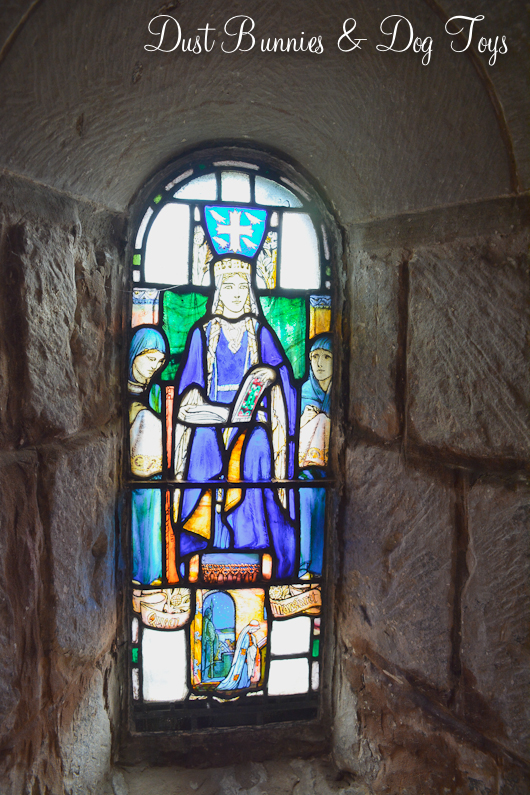 I was pleased to spot this dog cemetery along the edge of the castle wall.  The sign identifying it as such said that it had been in use since Queen Victoria’s reign as a burial place for regimental mascots and officer’s dogs.

We also got to watch the firing of the One O’Clock Gun. This is a long standing tradition which dates back to the days before accurate timepieces were available and the signal allowed sailing ships in the Firth of Forth to check and reset their chronometers.  I’ll try to share a video of the event on Facebook in the next few days.

Having seen all the major attractions at the castle we decided to head out to other sights we had on our list.  The view of the castle from where we parked was a great last look at the history this location has witnessed. 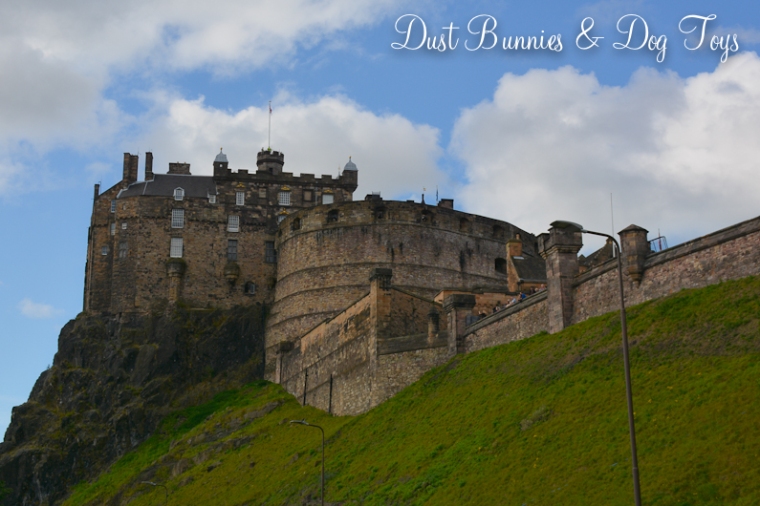 That excitement was tampered when we got back to the car and discovered that we had a parking ticket even though we had paid at the nearby kiosk.  We we decided to research our options and address the ticket another day once we were able to print out proof we had paid for a permit.  So we made our way out of the bustle of the city to see some more history in the nearby countryside.  I’ll share that next, so stop back by soon to continue the adventure. 🙂

Check out our other Scotland adventures:

And our travels through Iceland on the same trip with Day 1, Day 2, Day 3 and Day 4.