The temperatures are getting warmer and the sun is out longer which means it’s time to get the deck ready for summer!  I switched things up in the yard this year and put the sectional seating elsewhere so we could have a dining table on the deck.  Having one here makes more sense because the grill is nearby and the space is just off the sliding door to the main area of the house where the kitchen is.

I picked up this great table and chairs set on the local buy/sell page for just $100.  I love that the metal design is sturdy and won’t hold water so it should be ready to enjoy all the time.  I originally planned to add cushions to the chairs, but they are surprisingly very comfortable so I just used the throw pillows I already had instead.

The hubs dug out the umbrella and we placed it with the table for extra stability.  It took a tumble off the deck at the end of the season last year which broke the arm the hubs had repaired after we bought it at Goodwill.  This time he used metal tubing and painted it to match so it blends in quite well.

You really have to look closely to spot which arm is the one that’s been repaired, so I’d say he did an excellent job!  As an extra precaution we keep the umbrella down when we’re not using it, just in case the winds pick up when we’re not around. 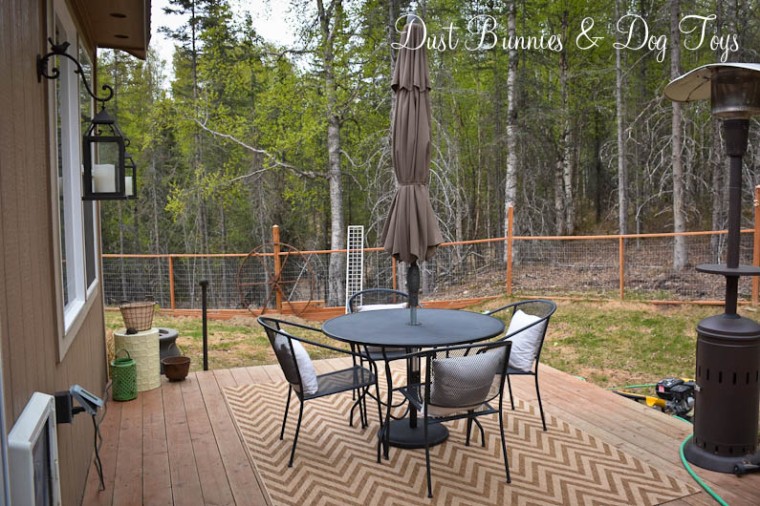 Before we got everything set up we also pressure washed the deck (ignore the fact that it’s still sitting off to the side there.) so we had a clean slate to start with.  We’ll be painting the deck at some point this summer since it’s starting to show wear and needs a refresher, but a good wash works for now.  I’ll be adding plants to the various planters you see in the far corner this weekend and tilling the area around the deck to add landscaping there.  Check back next week to see it all come together! 🙂

Remember my $25 bench? This is what it looked like when we first got it. It was pretty enough, but it was definitely worn and in need of some TLC.

This weekend the sun was shining and I just couldn’t resist doing projects outside. Since my yard is still on hold while waiting for the builder to clean and grade our lot, I focused my energy on other outdoor tasks like updating the bench. While the fur babies played in the yard, I moved the bench out to the driveway and did a quick sanding by hand to even out a few rough spots. 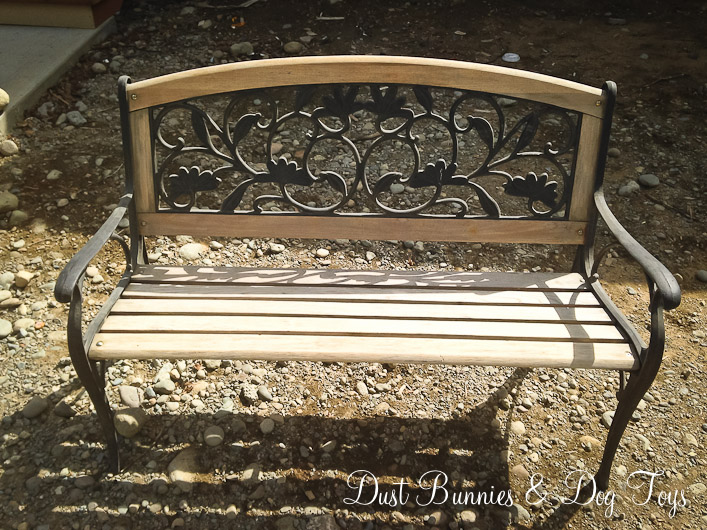 Next, I applied a dark stain we had on hand and about 30 minutes later, this was the result! It looks a meeeelllion times better and I didn’t spend a dime! It just doesn’t get better than that!

Since it’s just a tad big for the corner of the porch, I plan to put it down by the rain garden so I have a spot to sit and appreciate the blooms. That means I’m now on the hunt for some outdoor chairs in need of a touch up to fill my empty porch! 🙂

When we brought little Bacardi home, the hubs made the doggie door go all the way to the floor so it was easier for her to learn how to use it.  That change also provided Luna the opportunity to start using the exit as well now that she didn’t have to jump over a glass panel at the bottom.  This new-found freedom turned her into quite the explorer, much to my concern. 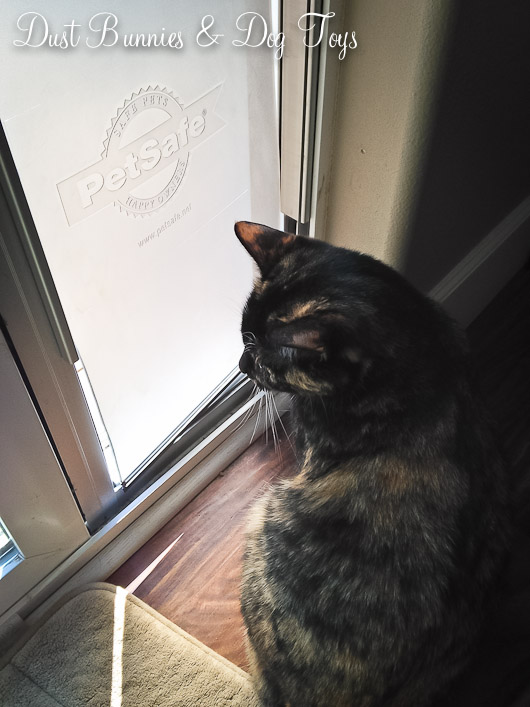 I’ve always had indoor/outdoor cats and hoped to eventually get Luna to that status one day as well (mostly so we can eliminate the litter box!), but I was nervous since she’d always been an indoor cat and had only been outside with supervision before this.  She had just recently started going out without her harness and leash, so she was probably feeling quite liberated.  Granted she does have her claws and is pretty good at defending herself with the dogs, but Alaskan wildlife might be a different story.  Also the cats I’d had in the past began life outside and migrated to becoming part-time indoor felines, so I never worried that they had the skills to find their way home safely.

At first she stayed pretty close to the house, scouting along the walls, but she soon grew bolder and started wandering out into the trees.  Then she would disappear for several hours at a time.  This included a couple overnight explorations on very chilly nights, which was worrisome for me. 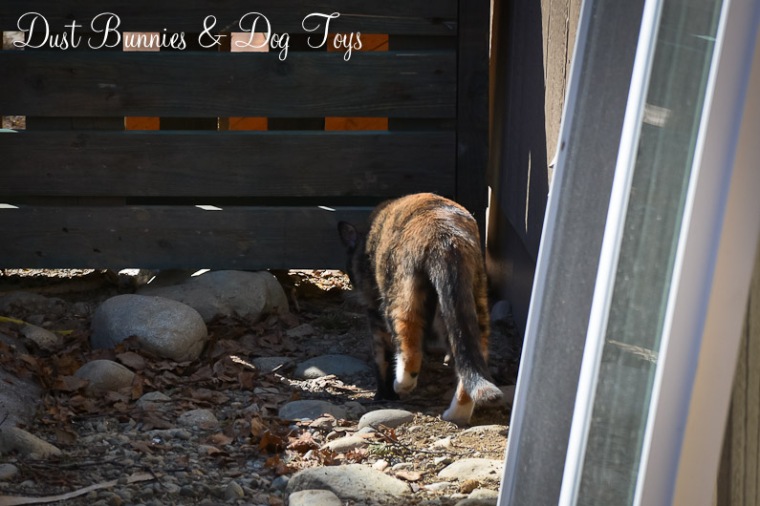 But she kept coming back home to her food bowl and belly rubs while snuggling on the bed with Mom & Dad.  So my fears have subsided, although I still worry when I haven’t seen her for a while.  It’s just a Mommy thing.  But I’m  also proud to see her be independent.

Unfortunately, she also still seems pretty tied to her litter box.  In fact, we watched her come inside, eat a few kibbles, go potty and then go back outside. I’d get rid of the box and force her to go outside, but I feel think that might be a cue to go a little too independent. Plus I’m fairly certain that her outdoor adventures will subside come winter since she’s not a fan of the snow. So I guess scooping the box remains on my to-do list for the time being.

Although it’s been in the negative temps around Anchorage recently, I haven’t broken out my full arsenal of cold weather gear yet.  But with a work trip to Fairbanks today, I finally gave in and dug out my Skhoop skirt.  This insulated skirt is basically a coat for your booty and legs.  I first heard about them last year when I was visiting Anchorage from Kodiak and noticed someone wearing one.  I asked how she liked it and when she said it was awesome I asked where I could get one.

When I researched them a little more and saw the price tag I decided it wasn’t really necessary, but the next trip over the hubs made he got one for me because he knew I’d love it – especially since he got the purple one!

Dubbed “smart clothing for active people”, the Skhoop brand originated in a small Scandinavian village where outdoor winter activities necessitated insulated clothing.  Now available in a variety of styles and lengths, along with other clothing and jackets Skhoop has become a best seller in cold climates like Alaska.

I chose the shorter skirt, just because I was afraid my clumsy self would get tangled up in the longer version and do a face plant in the snow, which would defeat the warmth on my posterior.  Although there are days I wish I had an extra layer on my lower legs, that’s probably the area of the body least affected by the cold – at least for me.

I’ve added a pair of Polartec touch screen gloves from Althleta to my daily use line-up this year and am pretty pleased with them.  Especially, knowing that I got them for free thanks to rewards points on my credit card!  I also got a pair of fleece tights with the balance of that reward card and another $9!  I love a good bargain, but I relish it when it keeps me warm too!