Now that I’ve finished sharing our Iceland adventures it’s time to catch you up on the fun we had in Scotland.  We had an early morning flight from Iceland into Edinburgh, but by the time we got our luggage, rental car and made our way to the hotel it was time for a late lunch.  After lunch we made our way to the Royal Botanical Gardens near downtown.  It took a bit longer than we had planned to figure out the directions to the garden and the parking app since we didn’t have any coins to pay the physical meters.  And once we had paid for parking we realized we were a 2 block walk from the only open entrance to the gardens.  But it was all part of the adventure and it was perfect fall weather for a stroll through the gardens with crunchy leaves underfoot on the sidewalk along the way. 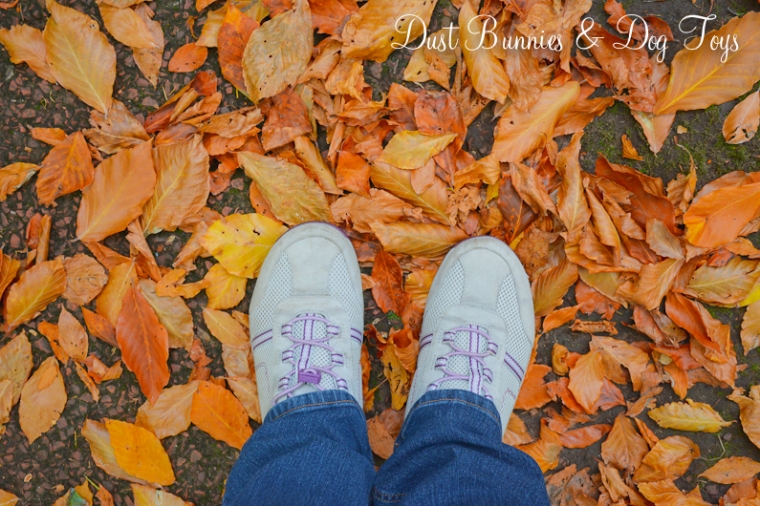 We wandered the various gardens only occasionally looking at the map we had picked up in the visitor center.  This area was one of the first we explored.  It had several different zones to showcase the various climates around Scotland and nearby areas of Europe. 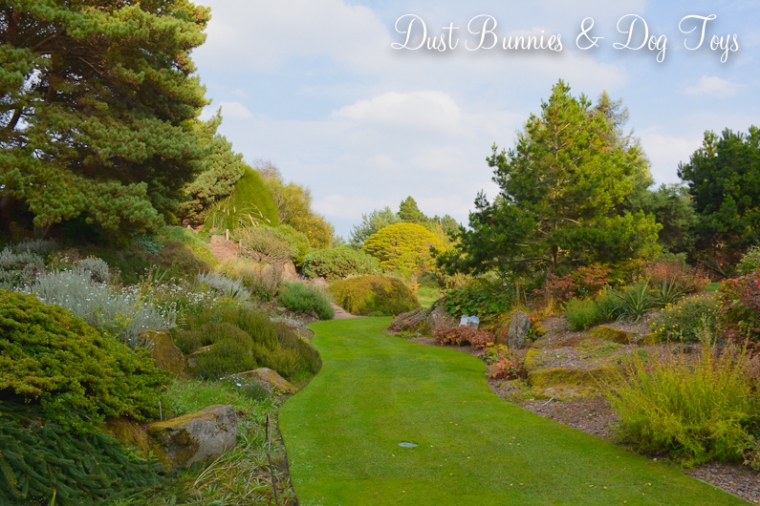 I spotted this driftwood arrangement in one of the display beds and had to point it out to the Hubs as proof that his wife and his mother aren’t the only ones who decorate the garden with “sticks”.  See even the pros do it!

As we wandered to another area there was a unique looking tree.  From a distance I first thought it was a pine tree but upon closer inspection we realized it was quite different.  It’s called a Monkey Puzzle and was brought over from the mountains of Chile. 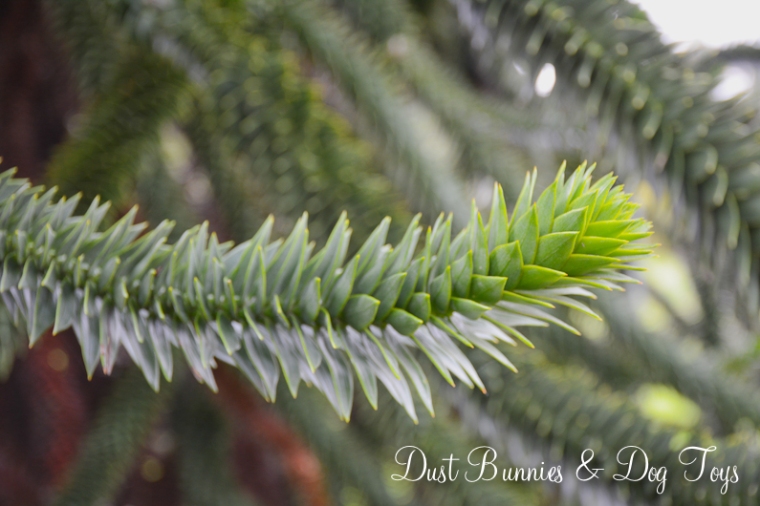 Just beyond the Monkey Puzzle tree was this MASSIVE green house.  I could see trees growing inside and was excited to investigate, but it was closed for maintenance work.

So I browsed the flower beds around the green house, where I found these amazing Arabian Nights Dahlias.  I’m going to see if I can find some to plant in the Gifted Garden this summer.  There were also some flowers that looked like ones I’ve seen on cactus in the dessert.  I haven’t researched them yet, but they were pretty cool looking.  I’m sure they wouldn’t do well here in Alaska though.  They were surrounded by moonfire dahlias so I’m assuming they would have similar growing needs.

Along the walkway was this sign notifying guests that there were robotic lawnmowers at work in the gardens.  We didn’t see any but I thought the idea was quite smart given the expansive areas they have to maintain.

We spotted this unique gate nearby.  It took me a few minutes to distinguish the design but once I did I though it was very whimsical and perfect for an English style garden.

Around the corner was this beautiful green house, which was also sadly closed to visitors.  But the giant log out front was a petrified tree that had been discovered in a nearby region.  I’d seen such pieces in the US at national parks, so I didn’t spend much time on that when there was so much else to see.

The next area was this beautiful green house and cold frame setup.  I about swooned when I saw them.  These ones were set up to display a variety of alpine plants, which  I thought was interesting given we have so many of those varieties just above our home on the mountain and they are a specialty garden item in the local nurseries for those who have the set up or right micro climate for them. 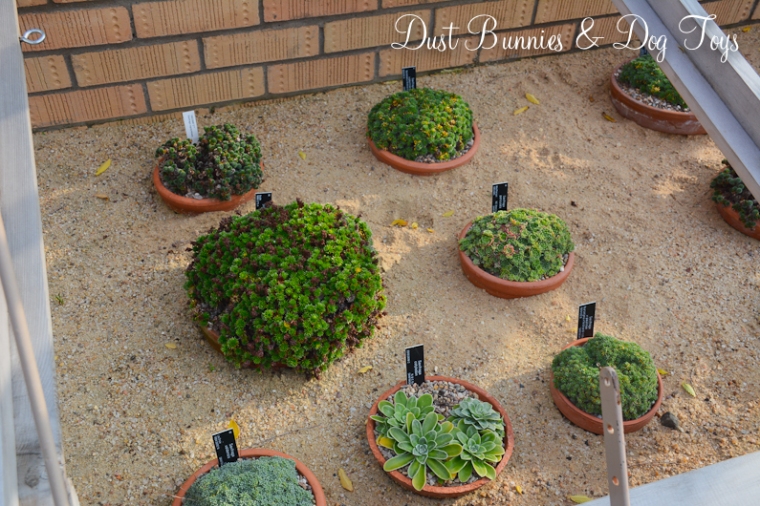 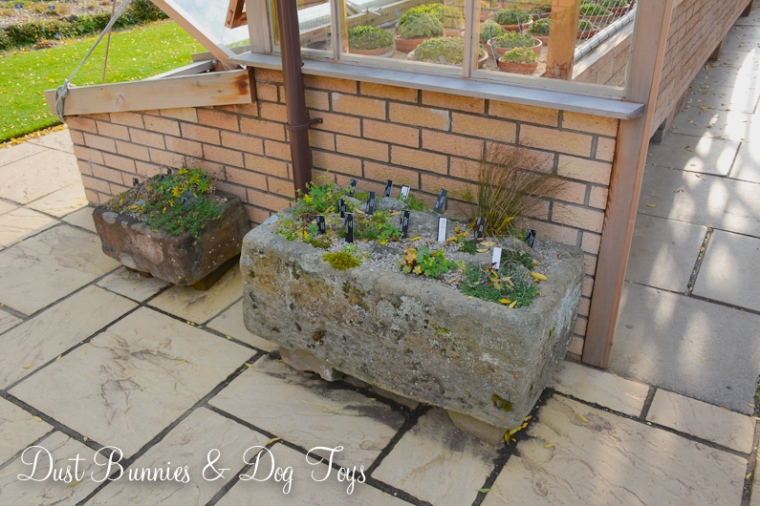 Next to the alpine displays was the Queen Mother’s Memorial Garden.  It is a typical English style in honor of it’s name-sake, but the most stunning part of the garden was this small building in the back which was covered with a pattern of symbolic shells on all of the interior walls.   I can only imagine the man hours that went into creating this design and in maintaining it.

Nearby was my favorite area of the gardens by far.  This area was wild and free form with flowers and edibles mixed together.  There were trellises and archways made of bamboo and willow drawing you in to the various areas.  To one side was a knot garden, so-called because of the knot pattern the plants created. 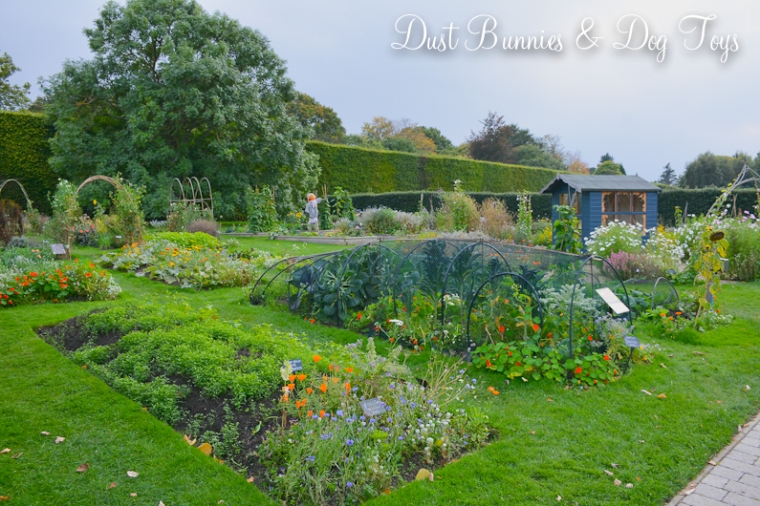 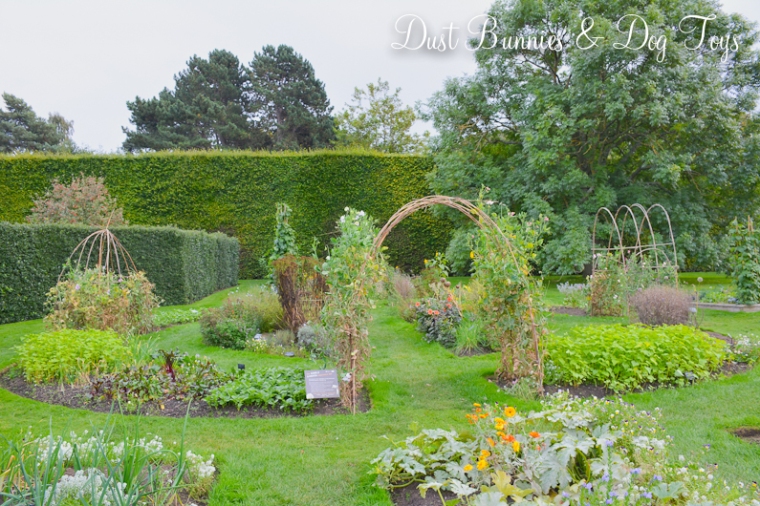 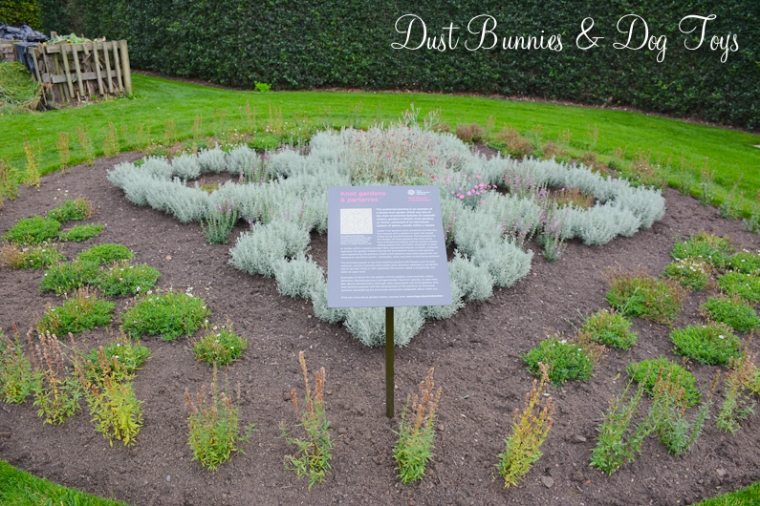 The entire area was bordered by this massive hedge, which had openings cut into it to return to the other areas of the garden.  There had been some sort of event there in the days prior and a little flag banner was left up across the arch way.  It was just the right amount of decoration for the space.  You can tell the Hubs was super excited about my need to run back and get a shot of the whole scene.  Good thing he loves me and knows I can’t resist documenting pretty garden ideas.  😉 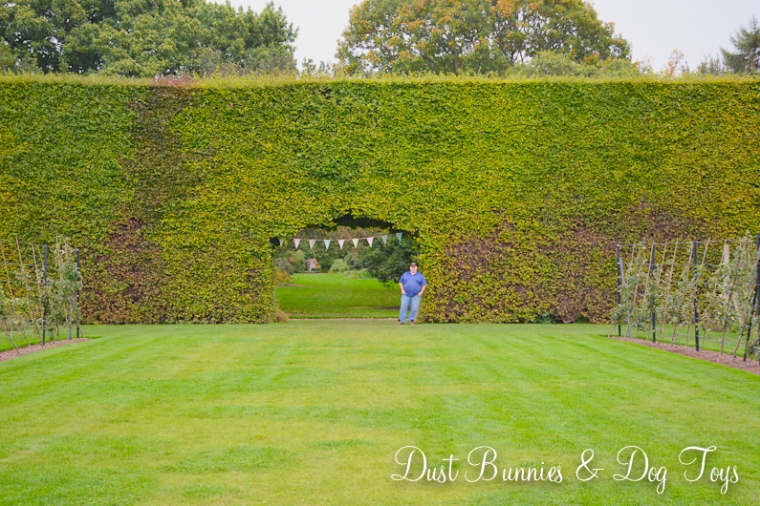 We stopped in the gift shop on the way out and I fell in love with several items they had in the outdoor area.  This bird feeder with a slate roof and stained wood definitely called my name, but the price tag and weight it would add to my suit case sure didn’t.  So I took a picture instead hoping I can find something similar when we visit my mother-in-law in Washington later this year.

I also considered this bug house for our garden, but it too had a hefty price tag and I’ve seen similar designs online so I passed.  I did find a smaller version that had a better price tag, so I bought that and will be adding it to the garden this summer.

I was surprised to find these hedgehog houses in the shop.  Apparently hedgehogs are great bug eaters and are often kept in gardens to help reduce pests.  I’m going to research if they would be able to survive in Alaska indoors during the winters and if so I might just try to talk the Hubs into getting one when we have our barn built in a few years, and then he can build said hedgehog a cutie garden house for a summer home!

There were also an assortment of bulbs that I really wanted to buy, but after checking online we were fairly certain they wouldn’t be allowed into the US due to agriculture laws.  The gardens were closing so we purchased some yummy treats and made the walk back to the car.  We enjoyed the old world style of the homes along the way noting how the gardens were part of the houses and helped provide privacy from the street.

We had planned to visit the Edinburgh castle that day as well, but we were tired from our flight and wandering the gardens so we opted to save the castle for the morning.  We headed back to the hotel and had dinner in the restaurant there before calling it a night to rest up for a full lineup of sights the next day.

Check out our other Scotland adventures:

And our travels through Iceland on the same trip with Day 1, Day 2, Day 3 and Day 4.

2 thoughts on “Our Scotland Adventure – Day 1”