As promised, today I’m sharing what’s underneath the art display boards in the Foster Room that I showed you yesterday.  I created a fun storage cubby system with simple wooden crates which can hold books and toys.  I got the idea from one of my favorite blogs and originally planned to mount the crates on the wall like she did, but wanted the option to use them occasionally as props for photo sessions occasionally so instead I opted to just stack them on the floor. 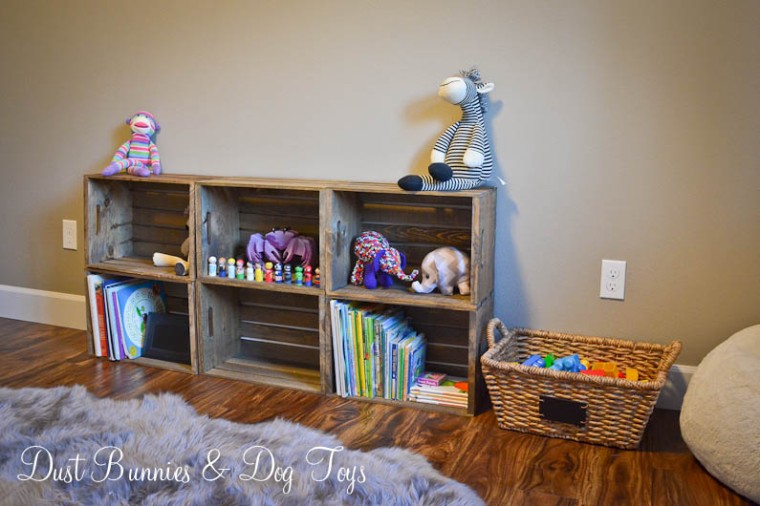 I was a little worried that the baseboard would make the bottom row stick out more than the top row and leaving a small gap behind the crates would make them unsteady which could be a safety issue around children but when I set them up they felt pretty sturdy. I figured only going two rows high keeps things at kiddo level so there’s no need to reach or lean on them and keeps the center of gravity on he whole group low so I’m not worried about it.

It coordinates with the art display boards well and is just as flexible since we can change up what’s in each cubby to fit each child’s interests.  There is also a digital frame in the lower left crate where we can load pictures of things that they like, which should be a fun project to do together when they arrive to get to know them and serve a dual purpose as a nightlight.   The wide openings are perfect for storing books and the toys I’ve started collecting such as the adorable elephant a co-worker knitted and one I found on Etsy years ago.

I also ordered this peg doll set which should be interesting for a wide range of ages.  Since we don’t know who will be placed with us I got both the boy and girl sets which can be played with separately or paired up.  The cute purple crab in the back is something from my days working at the YMCA that I’ve kept.  I thought it was something fun a child might like and since it’s made of Styrofoam it shouldn’t be dangerous for them to play with.

Next to the crates I put some mega blocks in a basket for easy access and clean-up.  I found a large bag of them on the local buy/sell page for a few dollars and likes that they are larger so they won’t be a choking hazard for smaller children.  Next to that is a bean bag I used to use for newborn sessions before I got my professional poser pillow.  I think it makes a fun little reading spot right next to the book storage.

Since I bought the crates on sale and with coupons good for a percentage off a single item, gathering enough to make the cubbies required several trips to Michaels but it was worth the savings – especially since I go there often for my day job and can make a separate personal purchase while there! I used stain I had left over from the Moose Mount Board in the guest room for both the display boards and the crates so that was an additional savings.  Next up are the window treatments, which I’ll share tomorrow!

I’m still sorting through Hawaii photos and collecting my thoughts so I can share all the things we did with tips for those who are planning trips which I’ll share in several posts next week.  Until then, I thought I’d give you an update on some of the projects we completed in the Foster Room before our trip.  One I really like are these simple art display boards.

I needed something to fill the large empty wall, but also wanted it to be changeable with the seasons and each child’s interests without costing a lot so when I saw this idea on one of my favorite blogs I knew it was the perfect answer.  It was such a simple project that I did it all while watching TV and didn’t take any photos of the steps, but here’s the quick run down:

It’s the perfect simple solution and it can double as a spot to display little artworks to be oohh’ed and ahhhh’ed over.  For now I put up some simple dog and cat art I found online as placeholders.  I think the total cost came in under $30 and I have a third left over board stained and ready to be used for another project. 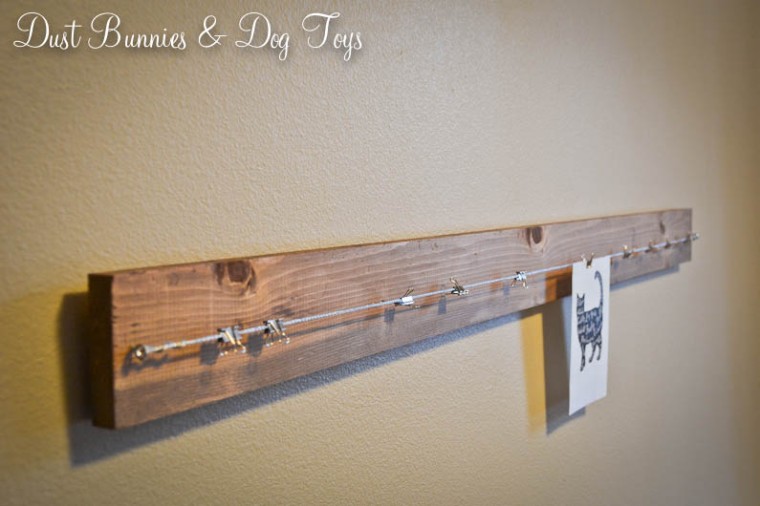 Tomorrow I’ll show you what we set up below these boards for more display and storage space so check back for that!