I’m still tinkering with my Christmas decorations, but since the big day is just around the corner, I thought I’d share what I’ve done so far.  I’ve migrated to a more “winter” look than full-on Christmas so things can stay up well into January without feeling out-dated.  That’s handy since winter in Alaska can last well into the months that most classify as “spring”.   I also find that my style is much more simple than it used to be, perhaps that’s an influence of our recent trip to Iceland where they have a very minimal Scandinavian look, or maybe it’s just a lack of time to create so much detail.

Things start out on the front porch, but I’ll share that in another post later this week.  Today we’ll start in the entry way where Red and Flint are the first of my reindeer herd to welcome guests.

Around the corner Gus hangs out above Brinley’s kennel where my cute storage bench used to be.  It was a victim of her teething stage and so now the kennel lives in it’s place.  Ahh the sacrifices we make for children…. 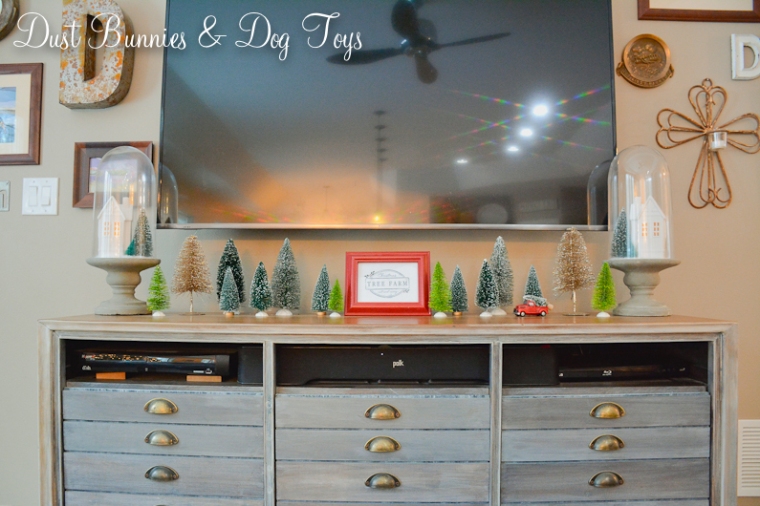 Just past the entry the media cabinet in the family room became a bottle brush Christmas tree farm just like last year.  I’ve added the lighted houses in the pedestal cloches, a few more trees and this cute little red truck, which used to be an ornament. 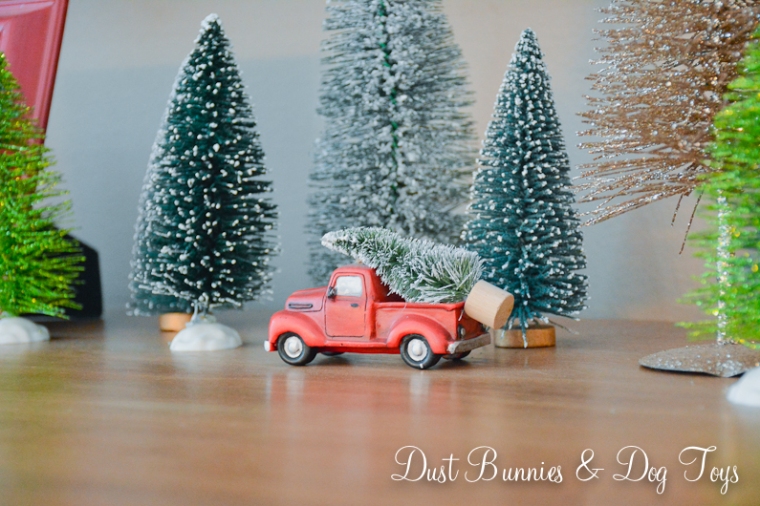 The mantel has a frosted garland and trees.  All of the trees except the two twig ones light up and create a pretty glow in the evenings – or pretty much most of the day since this is winter in Alaska!

I found the light up bottle brush trees at Joann Fabrics this year and am very pleased with them, especially since I got them for a great price with a sale and a coupon!  I’ll be watching to see if they have any in their after Christmas sales.  The two mercury glass trees came from a local vintage shop called Revive.  I’d been hunting for some all over town and had pretty much given up when I found them tucked away in a display at a great price.  If she’d had more I would have snatched them up too.  They also had hollow centers and access through the trunk section so I crammed a strand of fairy lights into both to give them a soft glow as well.  I may just add a strand of the same lights to the two twig trees so everything lights up!

Next to the mantel Sebastian has a view out the window next to his own tree.  Max moved out to the living room this year from the office where he’s been the past few years.  Now he is one window over from Sebastian. 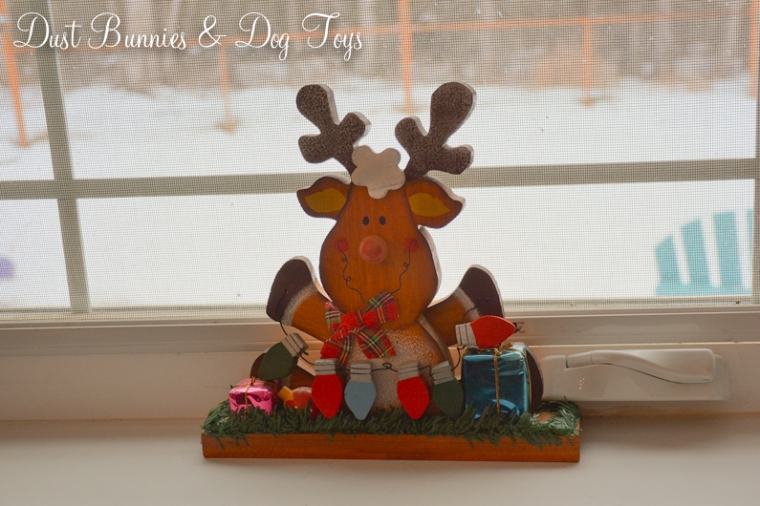 On the couch I’ve got a couple new festive pillows.  I picked up the Ho Ho Ho and tree one from Target’s after Christmas sale last year, but had to ship them to my Mother-In-Law’s house because they wouldn’t ship to Alaska.  Good thing I was able to visit and pick them up earlier this year. 🙂  The red plaid pillows are from JoAnn Fabrics’ fall line.  Pay no attention to the coating of dog hair – that’s what I try to do…

The side table next to the couch got a touch of color with this little wreath and lantern.  I found the lantern at a garage sale earlier this year for just $2 and the wreath was another JoAnn’s sale find for around $5.  I love how they look together.  This is the only time of year I decorate with red, but I love the pop of color during the long winter months.

The tree is behind the couch, next to the nativity on the curio cabinet.  When we first moved in 4 years ago I had a hard time figuring out where to put the tree, but this spot has worked out perfectly and become the tradition in our house.  We have a new tree this year, after our tree of many years stopped lighting up in several sections last year.  It’s an after Christmas clearance deal, so it’s nothing special but it will work for a few years until I can save up and somehow justify the cost of my dream tree along with the vintage style candles for it.

The tree has a bit of Scottish flair after our trip this year.  We picked up a couple of ornaments while there to continue the tradition of growing our collection.  Unfortunately one of those new ones met an untimely fate when Luna and Brinley ganged up to attack the tree soon after it went up (repeat that phrase about things you do for your kids…).  You’ll notice there’s less ornaments on the lower sections of the tree for that exact reason! But our Harris Tweed highland cow and Scottie dog are still safe… for now anyways. 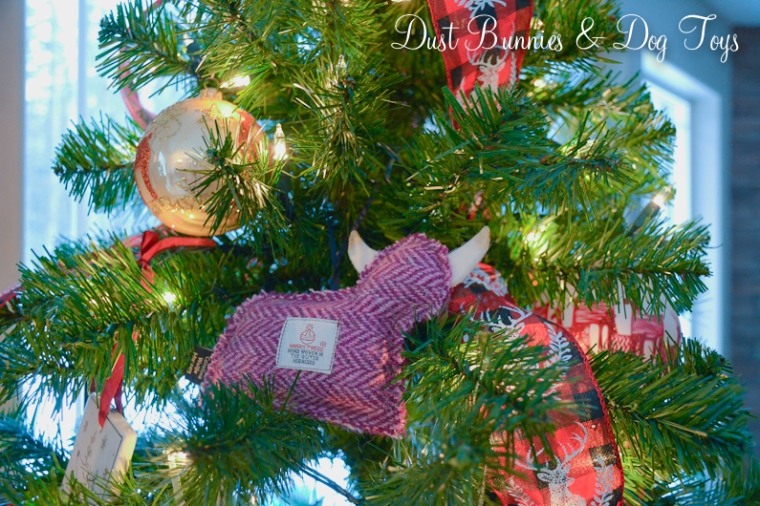 I had this sign for the nativity made last year after the holidays and really like it above the creche.  It’s the perfect compliment to the simple style of my beloved Willow Tree nativity set.

Over in the dining room, Moe found a new home this season on the scroll wall hanging where we put up the holiday cards we receive.  I really enjoy seeing him more often this year and think this will be his ‘usual’ spot going forward. 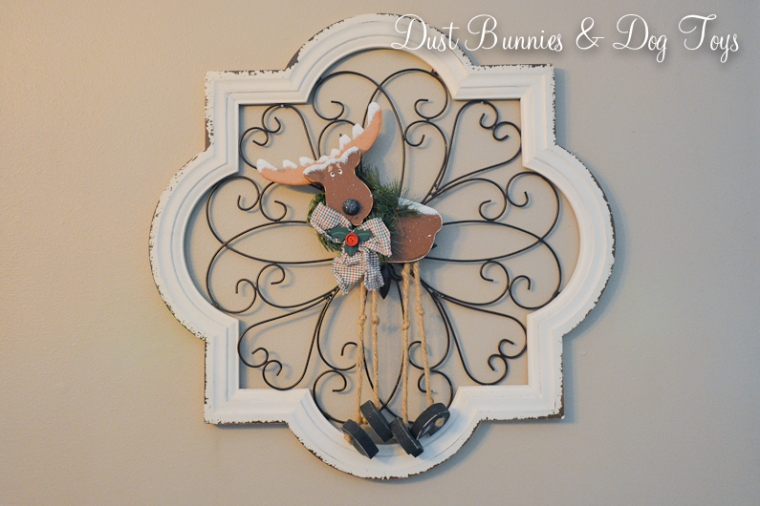 Next to Moe, this new addition came to us from WA where my wonderful Mother-In-Law went on a mission to find him at an antique shop I follow online.  Several ‘elves’ have made an appearance around our home this year and I think they are great care-takers for our herd.   I haven’t named him just yet, so if you have suggestions I’m all ears.  He reminds me of the Nordic elves we saw depicted in Iceland and even the Scottish Highlands so maybe I’ll do a theme using either of those cultures.

My dear, Milo ended up in the other windowsill, where he’s safe from the dogs.  I’d be pretty heartbroken if something ever happened to him.  His expression seems to say he knows how dangerous being closer to the floor could be in this house!

On the back wall of the dining room I hung my North Pole sign from last year under the windmill and decorated the top of the buffet with faux winter greens, antlers and gold tone votives.  I’d like to make some twig luminary trees to add to this set-up and since the look is “winter” rather than Christmas I’ve got time to do that even after the holiday. 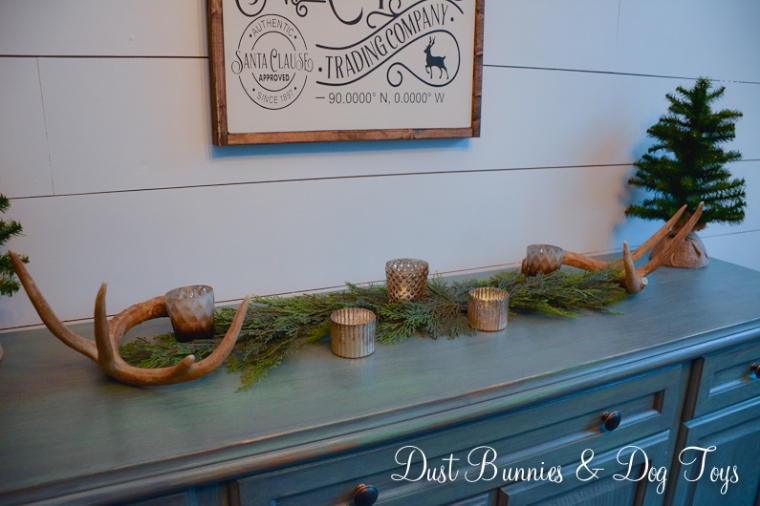 The two votives in the front are new this year.  They were a fun little find at the Alaska Chicks Vintage Market a few weeks ago.  At just $2 each I thought they were a great price too!

The new mug rack also has a few more additions to it for the holidays after the Alaska Chicks show. 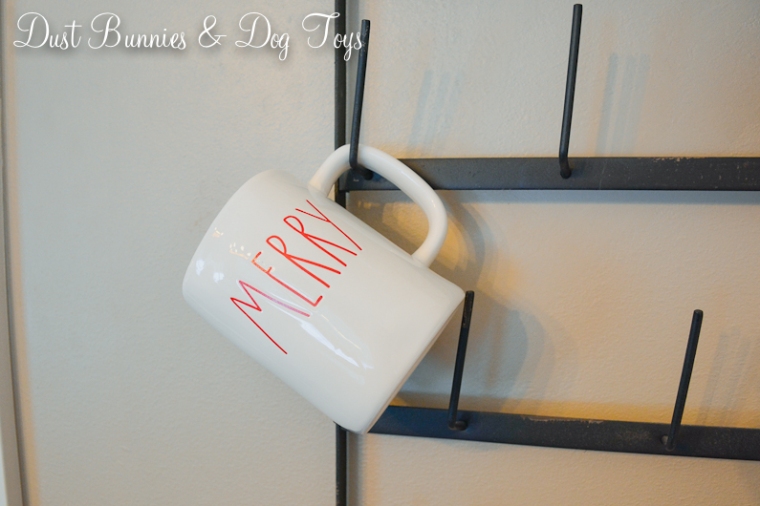 This sweet little fella was also part of my Mother-in-Law’s adventure to the antique shop.  Isn’t he just the cutest thing ever?  While he’s not quite “Christmasy” I just couldn’t not put him out right away after she made the effort to find him for me.  Plus the little sprig he’s holding kinda looks like holly and the red rim ties him in to the season – at least in my mind. 😉

There are also little touches of Christmas in the other rooms, including this little church in the laundry room.  It started out as an ornament, but I like it much better as a decor piece here after a few little modifications. 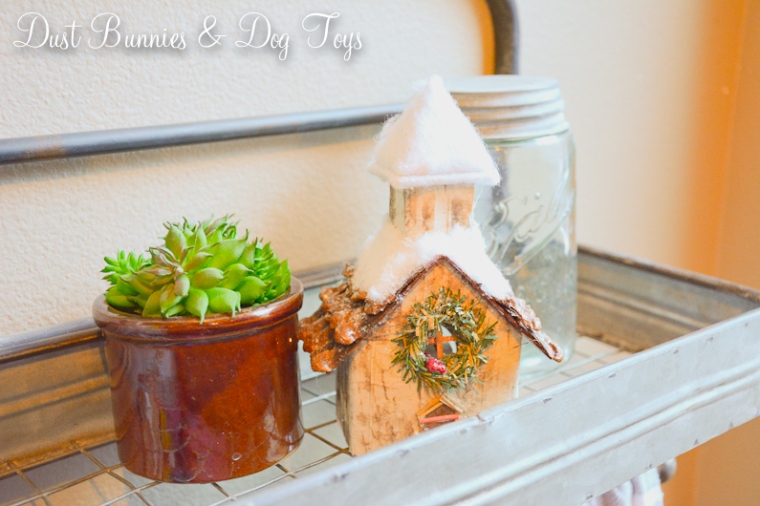 Below the shelf is another little elf with a reindeer buddy just his size to keep him company.  These two also started life as ornaments – I think I’m sensing a trend here.

The office window where Max used to sit is now home to the lovely Daphne who joined the herd last year.  She’s got her own little tree and some pretty votives to light up the dark.

Also in the office is this sweet little fox I found at the grocery store!  He was the last in the display and just begged to come home with me.  He’s looking quite dapper on the daybed, among all the pretty pillows.  He also needs a name so keep those suggestions coming!

In the hall bathroom another couple of ornaments turned decor add a little touch of the season to the existing decor. 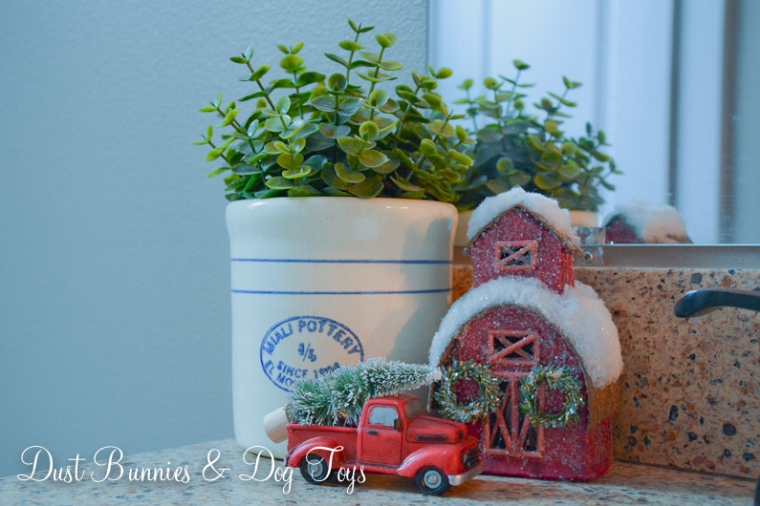 In our bedroom are two pretty little reindeer my sister found for me last year.  They too started as ornaments, but now they hold their own on our nightstands so we have some holiday cheer at the end and beginning of each day.

In the guest room, there are some little Santas on the nightstands.  If you follow me on Instagram, these are the find I made at that lovely store I made it out of only spending $10! 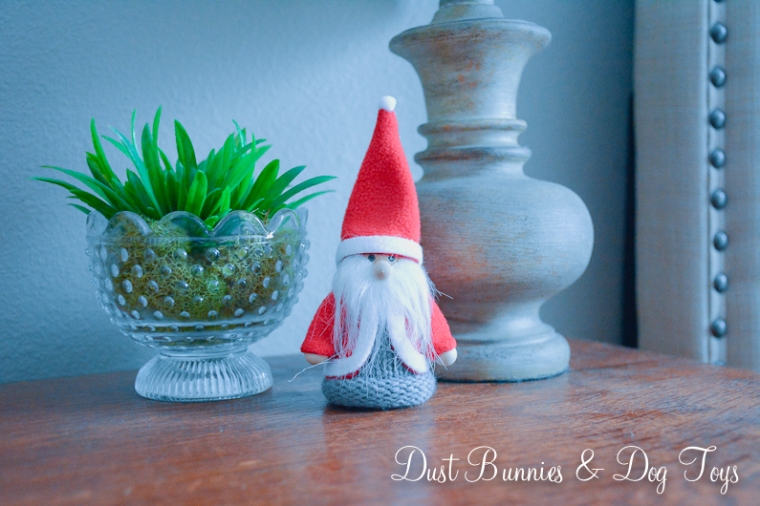 The chair in the guest room also got a little update for the season with this simple pillow I found at Hobby Lobby during our recent trip down south.  I’m so glad they already had Christmas stuff out while I was there!

So that’s the tour of our Christmas decor.  I hope you liked it!  Stay tuned to see what I’ve done out on the porch, or get a sneak peek over on Instagram! 🙂