Over the holiday weekend we added some new members to our family!  Welcome (from back to front) Biscuit, Nugget, Fil-a and Curry.  And they have some fancy new digs courtesy of the hubs handi-man skills!  Here’s a quick photo tutorial of how it went together.

He started with two side panels of framed wire, to form the main area which serves as a run for the chickens to move around in.  He added more framing for what would become the hen house floor at the rear of the coop.

Next he added sides to the hen house, followed by foam insulation.  He also extended the floor of the hen house past the framing to make an area for nesting boxes.

After insulation was added to the floor, the nesting boxes starting to take shape at the back of the hen house. 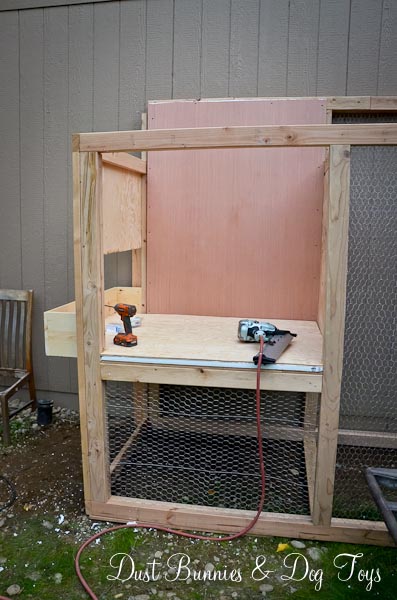 Then he added dividers to make three separate boxes so the ladies have a bit of privacy when laying.

Next he added a roof to the nesting boxes that can be lifted for collecting eggs.

This puppy is well insulated so the chickens will stay nice and warm when the weather dips below 0 during the winter.  With insulation foam sandwiched between layers of wood on all of the walls and floor it should be pretty cozy. 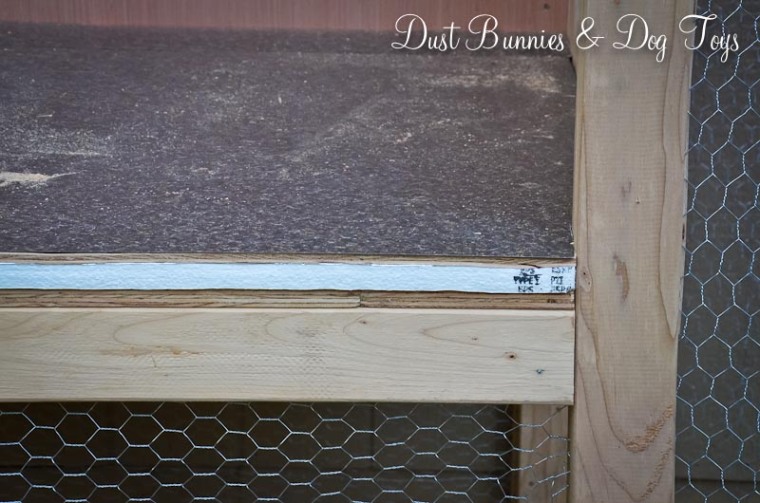 And if you’re wondering if it’s sturdy, Stoli and his 70 some pounds of muscle can guarantee that it is! 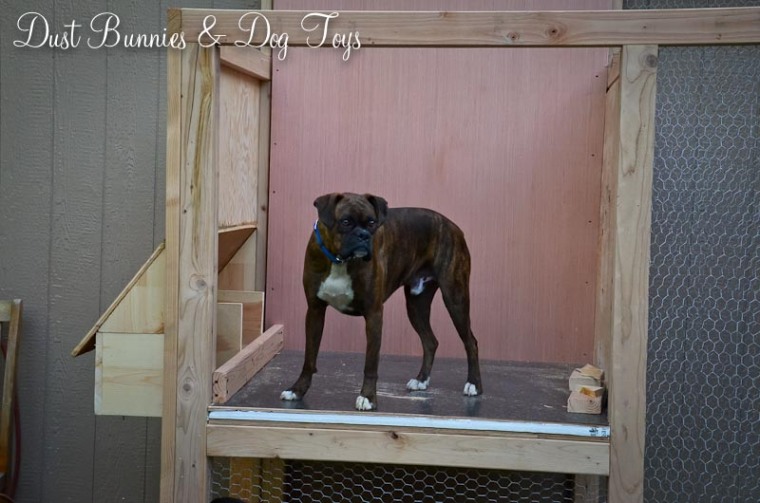 Once the main parts of the walls were in, he added the roof panels. 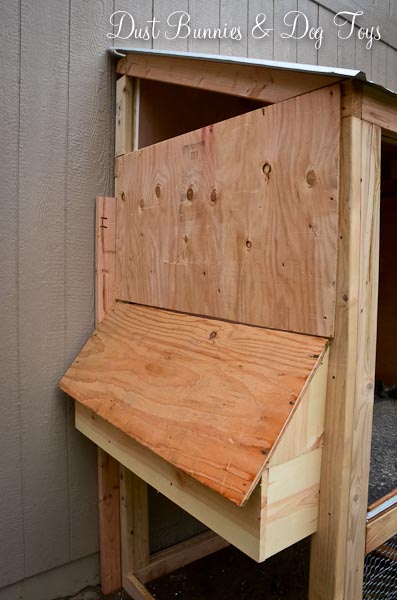 And from the side it was really starting to look like a coop!  If you notice, we moved the coop forward a bit so there’s more room at the back because the clean out access for our septic line is right next to the house and should we ever need to use it we wanted some room to work.

At my request, he added a covering of linoleum material on the entire hen house floor to make cleaning the coop out easier.

And here’s the finished project – after several weeks of work!  Unfortunately, it rained here for most of the holiday weekend so I wasn’t able to paint it before we brought the chickens home, but once the weather improves for a few days all of the wood will get a coat of bright white, which should give it a true farm house feel!

The nesting box roof got a metal covering to match the rest of the coop and keep the elements at bay.

You can see most of the inside of the hen house when the small roof is lifted – a feature I’m sure I’ll appreciate immensely when checking on them during the winter.

In addition to the nesting boxes, the hubs installed an inside roost for the hens to use when the weather gets colder.

The two side doors open wide to give full access to the inside of the hen house which has a light to provide both warmth and stimulation to continue laying throughout our dark winter. 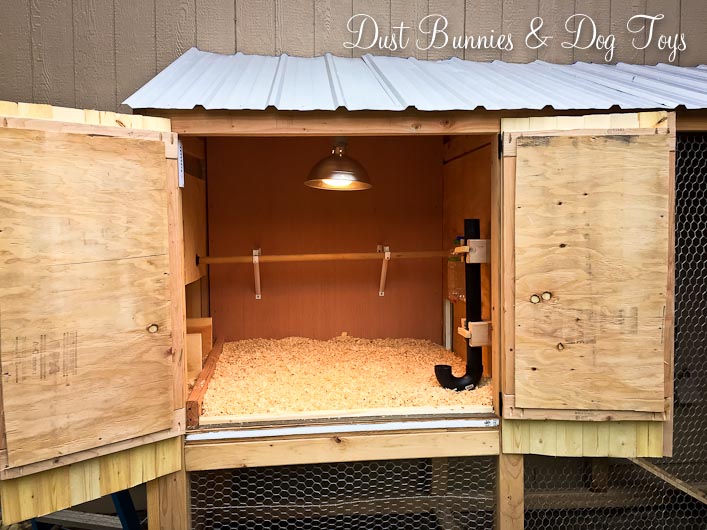 He also installed a feeder made of PVC pipe and a water bottle with a nipple at the bottom so both stay as clean as possible with minimal waste. 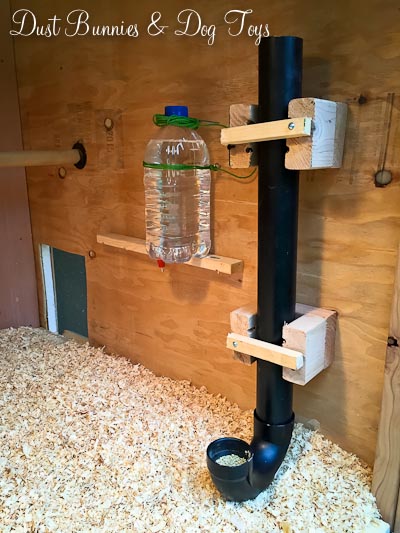 I’d never used poultry water nipples before, but they operate on the same mechanics as a rabbit water bottle and the chickens had some at their previous home so they already know how to use them.

A ramp to access the hen house from the run and a large branch for an outdoor roost made it chicken ready.

Everyone was very excited to meet the chickens.  Even Luna came out to welcome them, although she stayed out of the dogs way by perching herself on the nearby ladder.  To give the chickens some breathing room from their four-legged siblings we fenced off the main part of the coop with some large metal grates we got for free on Craigslist a while back.  We’ll leave these up for a while until everyone is used to each other.  Until then they are under almost constant surveillance, but they don’t seem to mind too much.

Eventually I’ll add pea gravel around the coop so it doesn’t get super muddy, but for now we’re just happy to have the coop mostly finished (sans painting) and chickens inside it.

Although they aren’t free range like they were at their last home, I have been giving them yard cuttings and table scraps to dig through which they seem to enjoy.  And we all enjoy watching them settle into their new home. 🙂

2 thoughts on “The Cluck Club”