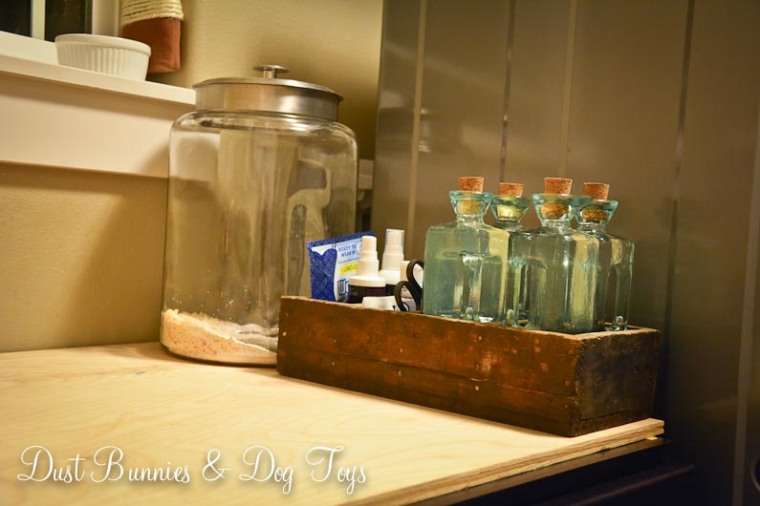 Shortly after we moved into the new house I found a wood tray from a cannery at an antique store.  With three compartments, I knew it would be a great way to organize my laundry supplies. Later when I saw these cool bottles on clearance at Pier One I knew they would be perfect for storing things like bleach. I also keep vinegar and hydrogen peroxide in my laundry arsenal so I got a couple extra bottles to hold those items as well. Luckily, the bottles fit perfectly in the compartments of the tray when paired.

When we had the utility sink this handy little tray lived on the base of the washer/dryer pedestal because there was no room for it around the sink. Now that the cabinet has been installed (cue heavenly music) and there is a workspace, it finally has a respectable home on the countertop.

Since I knew how they were arranged in the tray it didn’t bother me that the bottles weren’t labeled, but the hubs will occasionally start a load of laundry for me and requested that they be so he doesn’t “screw it up”. That seemed like a legitimate request, so I agreed and then promptly put it on my to-do list where it got lost among a myriad of other items.

So while he was working on the laundry cabinet I decided it was high time I cross this task off the list. I originally planned to make a stencil with my Silhouette and etch a letter on each, but that genius hubby of mine pointed out that I could simply use vinyl.  That simple idea took this project from difficult to super simple.  And because I keep scrap pieces of vinyl for small projects like this I had a perfect sized piece ready to go.  The hardest part was choosing the font!  Another project checked off the to-do list without a dime spent.  Love it. 🙂 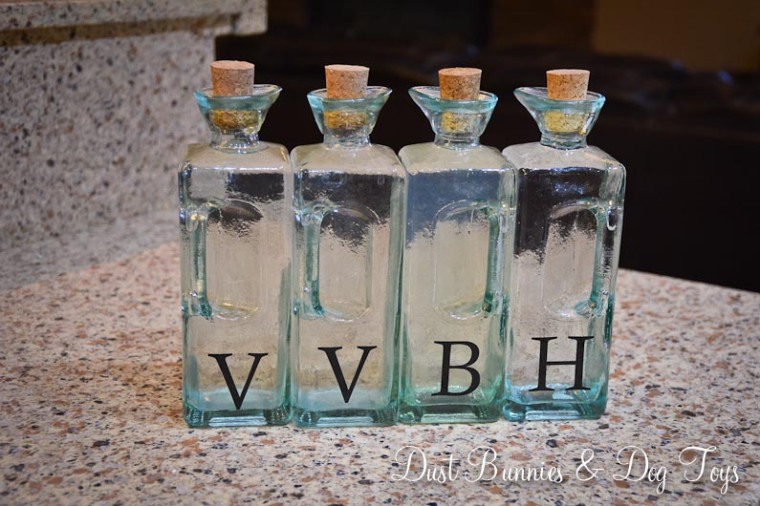