A week ago today, we said goodbye to our baby girl.  At first, the hubs and I had no intention of adding another pet to our household until we’d gone through the grieving process, even though we had been looking to add a third dog – a boxer – to our family.  But watching Tequila mourn her sister was more unbearable than our own grief.  She wouldn’t eat unless we gave her people food.  She wouldn’t play, even if we offered her toys and attention.  And she wandered the house, looking for Sangria.

The only time we saw her return to her normal self was when she interacted with other dogs, both the neighbor’s puppy who came by to visit and a husky pup we ran into at the PetSmart when she went for a nail trim.  So we talked it over and decided that just as we had done what was best for Sangria, we should do what was best for Tequila and find her a new companion.  That’s when God’s hand arranged the broken pieces in a pattern of healing.  A contact we had made before Sangria’s injury called us saying that the boxer she was looking to rehome was still available.  We set up a time to come by the next evening and let Tequila meet him to see how they got along.  We agreed to just “see how it went” and decide from there.

We knew the woman who was giving the dog up was in a tough place.  As a single mom of three young children, who was also caring for a father who isn’t mentally competent, all while working a full-time job, she had decided that she needed to place her priority on caring for her family – both mentally and financially.  It was an admirable and thoughtful choice.

We arrived with a basic knowledge of Bo.  He was a year old, having been born on Christmas Eve the year prior.  He was a purebred boxer, but not papered.  He knew basic commands, but was only “mostly” house-broken due to a lack of consistency in her availability to watch him.  He was good with children and other dogs.

It sounded like a good option for us, it was just a matter of Tequila getting along with him.  That question was answered immediately upon our arrival.  From the moment we walked in the door, the two played non-stop.  Because he was not neutered he did attempt to mount her once, which she quickly put a kibosh on and that was that.  They were buddies.  They played, bouncing back and forth across her living room, weaving in and out of her children as they too played.

As they frolicked the woman told us a bit more about him.  He didn’t have any major health issues.  Many of the commands she used with him were the same or similar to those we use with Tequila.  His parents were owned by her cousins.  His full name was Rocky Balboa because his dad’s name is Mohammed Ali, but they called him Bo or Bo Bo.  He would walk on a leash without pulling, and he needed a metal clip collar because he would snap the plastic ones.

I looked at the hubs and asked what he thought.  He smirked and said “well they obviously get along.”  I could tell from his face that he was thinking what I was thinking.  This felt right.  My head couldn’t compute the fact that I’d be welcoming another fur baby just days after saying goodbye to Sangria, but my heart had already accepted him.

We asked if they wanted to spend a few more days with him or if they would prefer we take him home that night.  The woman discussed it with her daughter and they agreed that they were ready for him to go to a new home as they had discussed earlier.

So we told the dogs we were going for a ride and both immediately went to the door, ready.  It took a few minutes for him to feel comfortable getting into our vehicle but once he was, he laid down on the center console and looked out the windshield ready to see where we would go. 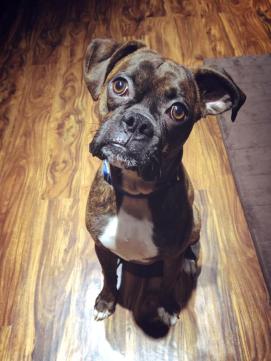 Just 15 minutes later we were home and gave him a quick tour of the house.  Although he was glad to find a food bowl, water dish and the doggie door, he was more interested in playing with Tequila.  They romped.  They ran.  They bounced. They snorted and grunted.  The hubs had to leave for work shortly thereafter, but before he did we caught each other’s eye across the room and shared a look that said, “this was meant to be.”

We decided to rename him Stoli – as in the Russian vodka – to continue our theme and started calling him Sto for short since it was close to Bo, so he’d get used to it.  There were a few ‘accidents’ the first couple of days, but once he was corrected and shown the doggie door again, he caught on.  He’s now had his first round of shots and been neutered so he can occasionally join his new big sister at doggie day camp.

We are all still learning each other’s habits, but overall he’s blended right into the family and I can say that even if Sangria were still with us, we would have brought him home.  It’s been hard to switch from “ladies” to “kiddos” but it’s been interesting to see how he has traits of both Tequila and Sangria.  He’s a helper like Sangria was, always wanting to know what we are doing and be right in the middle of it.  He’s emotional like Tequila, whining when someone leaves his sight and loves to snuggle up any chance he gets.  But he’s also got traits of his own, like preferring to play with someone rather than a toy and having a spot that when rubbed causes his leg to twitch.

He has brought laughter back to our lives and has nudged us along the path of healing.  Sangria wasn’t the first fur baby either of us had lost.  Both of us grew up with pets and well understand the circle of life.  Because of that, we both have patchwork hearts – full of stitches where a missing piece has been repaired, but the scar is still evident. 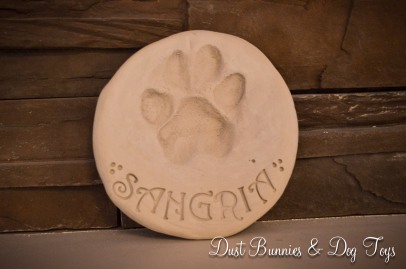 I picked up Sangria’s ashes New Year’s eve and was so touched to learn that they had also created a paw print stone, complete with her name imprinted.  We plan to scatter her here on the property in the spring and it makes me chuckle to think that will allow her to continue to be a part of every dust bunny in our home.  It was certainly a tough way to say goodbye, but we’ve come to realize that because of her spine fusing it was bound to happen at some point.  Plus her knee injuries would have required a change in lifestyle that wouldn’t have been feasible for her, causing her constant pain.  She lived every day to the fullest, literally on the go until she would crash each night.   She knew she was loved and she was happy, which is all any parent ever really hopes for their child.

And so, our family is on the mend.  We will never be 100% recovered, but with each day Stoli completes another stitch in the patch on this hole in our hearts and one day the wound will be closed and able to heal, leaving behind a scar to remind us.  A process I’m sure will happen many more times before we all cross the rainbow bridge together.