I love browsing the “Free” section of Craigslist because you just never know what you might find – like a hot tub!  The other day I spotted an ad for free raspberry plants.  I’d been planning to add raspberries to our landscaping and/or garden at the new house and thought even if they weren’t in great shape I just couldn’t beat free, so I called the number.

The lady told me they were growing behind a trailer she was renovating and I could go anytime to take as much or as little as I wanted.  She also said that they were producing berries already, they just weren’t turning red.  I told her I’d come by the next day to get them.  And the next day it rained.  All day.  I decided to hold off and see if the weather cleared, which it did the following day so off I went, with boots, gloves and shovel in hand.

When I arrived I was shocked to see a thicket of plants along the entire back side of the trailer.  They were almost as tall as me and growing like weeds.  I picked out the plants with the most berries that were the easiest to get to and started digging.  They came up fairly easily, so hopefully I got enough of the roots for them to transplant well.  I took about 5-6 plants as that’s all I had containers for at our rental right now and kept a few of the feeder branches that broke off but had small roots.  I wish I’d taken a picture of just how full the back of my truck was, but here’s what I ended up with once they were planted! 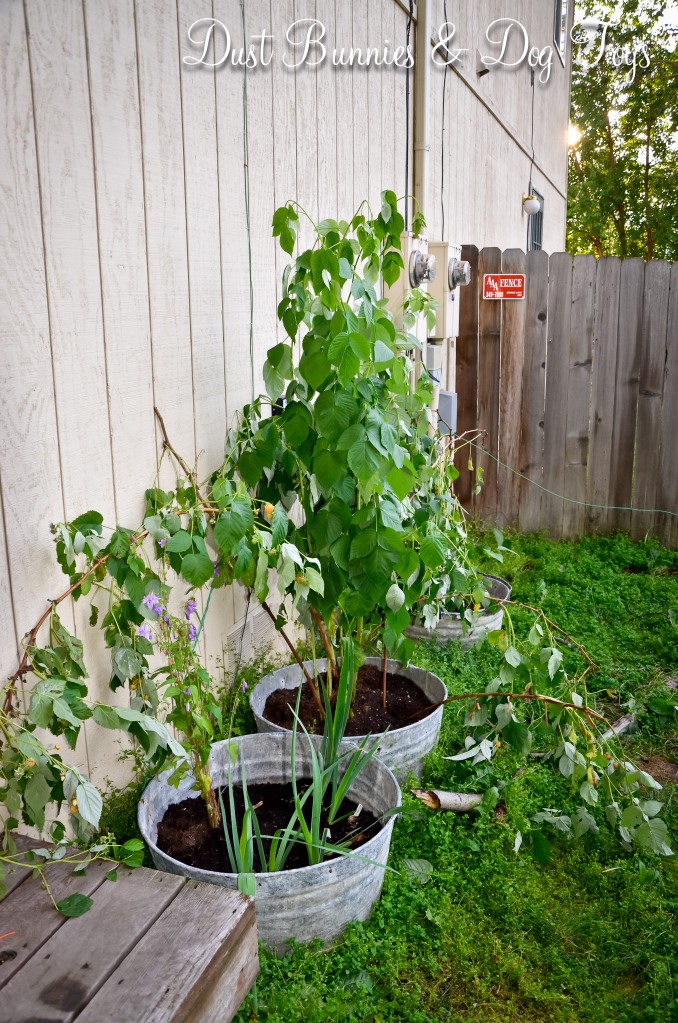 It’s hard to tell from this angle, but the tub in the back is just as full as the one in the middle.  The first tub holds the iris I traded tulip bulbs for in Kodiak and was able to bring with us when we moved this winter.  You’ll notice there are also some tall purple flowers in the back of that tub.  I collected those from the same place as the raspberry bushes since they were right next to the bushes and would have been demolished in the process of me digging.  Hopefully they take and can be transplanted into our yard next season.  They seemed to be growing on their own all around the site so I’m thinking they might be a local wildflower.  Here’s a closer shot.  Anyone know what they are?

The raspberry branches I kept ended up in their own planter.  That little bucket was the only thing I had left to plant in!  I’m not sure if any of them will take root, but I figured it was worth a shot.

The hubs and I wondered if they might be salmon berry bushes rather than raspberries and set out on an exhaustive Internet search to see if we could confirm that theory.  I’ve come to believe they are in fact raspberries based on the leaf shape, but if they develop purple/pink flowers next year they might just prove me wrong.  And just to prove that they do in-fact produce fruit, here’s a shot of one of the berries. 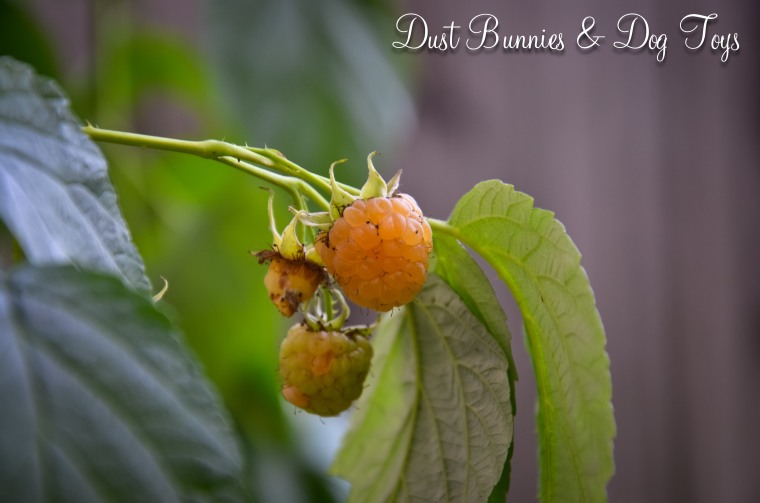 I decided to leave everything be for now and let them settle in.  If it looks like they take root I might prune them a little in the fall, just before winter to clean them up before the move.  If we get into the house before the first frost I’ll get them planted in the ground, but if not they can winter over in these tubs once I wrap them. Either way, I’m now planning for a sweet harvest next summer – provided that the dogs or the moose don’t get to the berries first! LOL