I’ve been on the hunt for the past several weeks to find a new star topper for our Christmas tree.  Although I’ve seen a variety of adorable alternate tree topper ideas, I like the tradition of a star atop the tree.  We used to have a large glittery copper paper star, that met an unfortunate demise when it fell off the tree and Bacardi ‘revamped’ it.  Last year we used an IKEA star, which is now on the nativity creche I shared last week.  It worked, but I didn’t love it and knew I wanted something new this year – besides, it looks a lot better with the nativity set than it did on the tree.

I was planning to DIY a star topper I saw on Pintrest but couldn’t find the right materials locally.  I also browsed Etsy for some ready to buy options, yet couldn’t find anything I loved.  So the top of our tree sat naked for the first few weeks it was up while I continued the hunt.  Luckily, during a recent stop at Walmart I spotted a gold colored faux mercury glass star that was ready to plug in and light up. 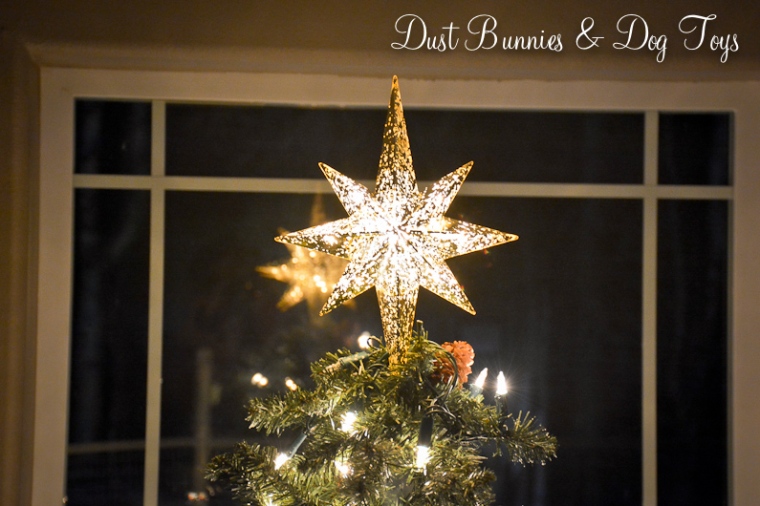 The box it came in was fairly beat up, so I looked for another one that hadn’t been abused, but after searching through all of the tree topper shelves I confirmed this was the last one in that style.  While it would still be pretty even if it didn’t light up, I didn’t want to pay full-price if I wasn’t going to get the glow atop my tree like I was envisioning.  Since it was quite early in the morning, the store wasn’t busy and a very nice sales associate helped me find an outlet make sure it still worked.  It lit right up as soon as he plugged it in, so I said I’d take it.

That night it went on top of our tree.  Since the plugs for the tree lights are in the middle of the tree and the star’s cord didn’t reach that far, I had to run an extension cord through the tree to plug it in. 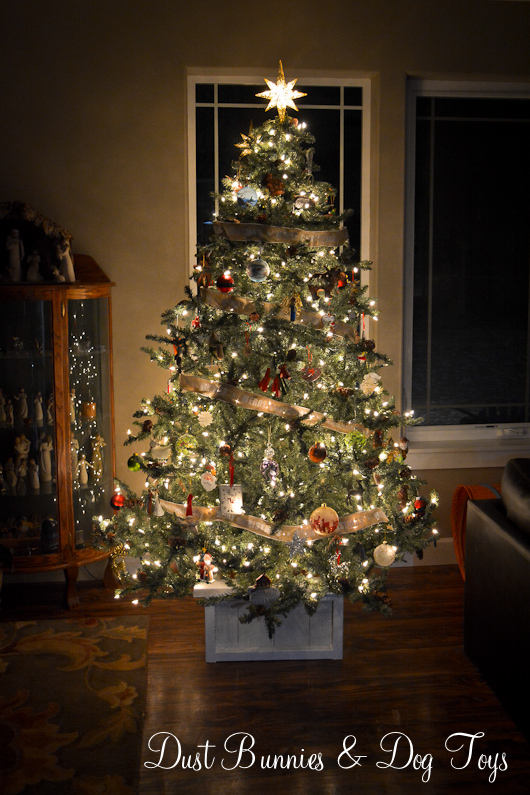 It’s the perfect finishing touch to our tree and well worth the little extra effort and hunting.  It’s got a rustic and vintage vibe with the mercury glass look, yet is classic and modern too.  If only I’d known to search for mercury gold star to begin with!

I’m pretty sure we will be replacing the tree for next year – I’ll be on the hunt for a bargain during the after Christmas sales – but the size and style of the new star should work well with any tree we get, so I’m planning to enjoy it for many more years. 🙂

I’ve had the same tree topper for years.  I bought it on sale after Christmas one year and added a string of lights so that it lit up.  I loved it, but it was always so heavy and cumbersome, requiring a rod to support it and a special extension cord to be run to it for the lights.  After fussing with it for 15 minutes this year and still not liking how it was sitting, I decided it was time for a change.

I wasn’t sure what I wanted exactly, but figured it would be another star because that just seems right to me.  I know an angel is traditional, and I think that’s what I had as a child, but many I’ve seen are down-right creepy or psychedelic.  I like the symbolism of the star, which guided the wise men to Jesus’ manger and being an Alaskan, the North Star is always a favorite.  So star tree topper a-hunting I went. 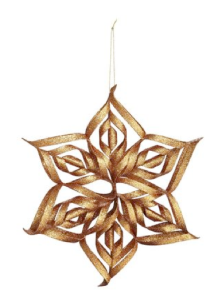 My first stop was Target, which had tinsel options, but nothing that seemed to fit my style.  I was considering researching DIY options when I decided to stop in at Pier One because I had a 20% off coupon.  They didn’t have any tree toppers but I did find this large glittered star ornament.  They called it a snowflake, but it sure looked like a star to me, especially in gold.  I wasn’t sure if it wold work as a tree topper so I carried it around with me as I browsed other areas of the store.

Something told me that even if I didn’t end up using it as a tree topper it would find a use in my holiday decor so I went ahead and bought it.  It was already a good price at $6.95, but I also got my coupon discount on top of that, so it was a super deal.

Once I got home I climbed on a chair and placed it at the top of the tree, arranging branches to make it sit just so.  After a few times off the chair to check and make sure it was straight, I was completely happy, so I cut off the hanging string and left it atop the tree.  It’s just the right scale to complete the shape of the tree and it coordinates with other decor in the house, so I think we have a new annual topper!  And for less than $6 it’s the best deal I’m likely to find, perhaps even after Christmas!