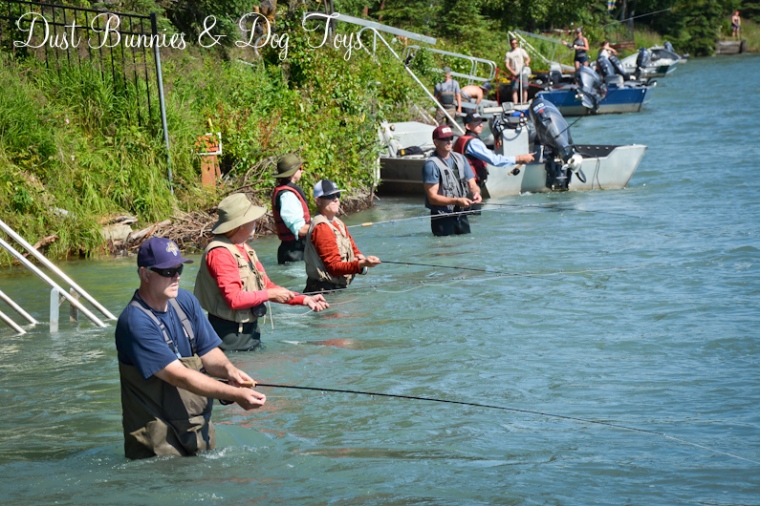 Over the weekend the Hubs and I made a quick trip down to Kenai to visit family who come up from Arizona each year to fish for salmon.  This year we were blessed with fantastic weather and a few extra familiar faces as additional family friends were in the area too.

The fishing was quite slow the day we were there, but it made time for conversation between those fishing and those of us watching from the walkway above.  The Hubs caught up with his uncle and cousins as they cast.

I enjoyed the sunshine and the view of the river which was full of others fishing on the opposite bank and boats making their way up and down the river.

It was quite calming to watch them all cast and reel repeatedly with patience as they joked about prior visits to the river, shared old stories from their childhood days together and caught up on each other’s lives.

Eventually the fish did start to bite and it was a team effort to make sure they were reeled in successfully.  It’s a great example of why we love Alaska – its a place where others willingly stop what they are doing to help you out, knowing that you’ll do the same for them when the tables turn.

The Hub’s cousin seemed to have the best luck with the fish, although several played hard to get.  One even jumped back out of the net after being scooped up – prompting some interesting net wielding! 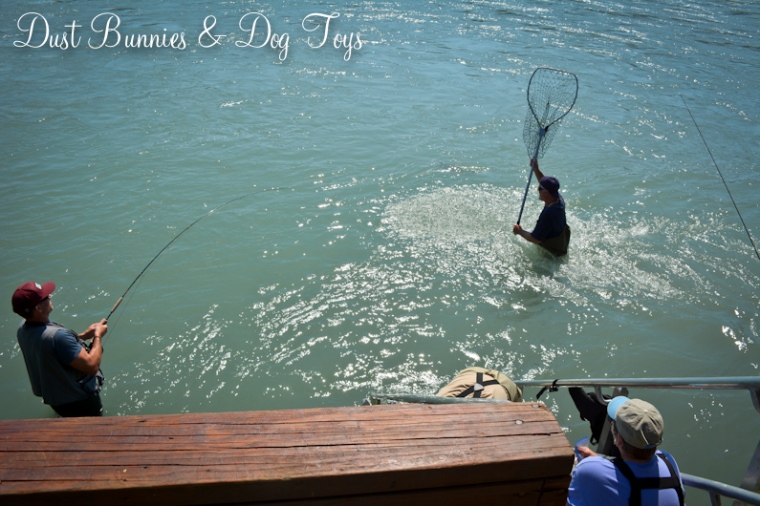 Several fish teased the anglers by brushing by their legs in the water.  Another decided to give the cousin a good splash when he was running the net for someone else, but that he didn’t complain too much and quickly got back to helping out. 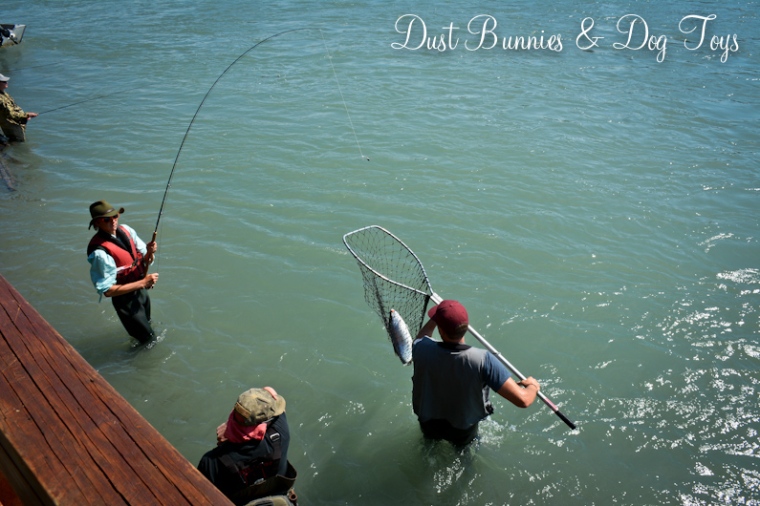 There were a few surprise catches too, including this rainbow trout that we all thought was a dolly at first. 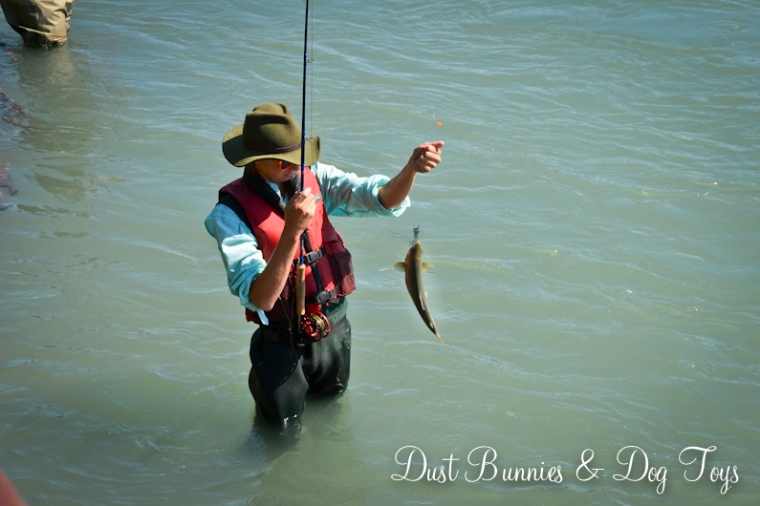 During one of the lulls I spotted this dog napping on a boat drifting down the river.  A little while later they were heading upstream and the same dog was standing at the bow, tail wagging like it was the best day ever. 🙂

I took a break to relax in the sun on a nearby bench which was apparently the good luck charm for the group, because that’s when the fish finally started biting.  Although they still played jokes on the guys, swimming into their stringer of other fish or along the shoreline that was covered in tree branches and sticks, making it likely to tear the nets.  But with every fish that was caught the smiles got bigger and bigger.

And every time I sat back to relax I’d hear “Fish On!” and jump up to see who had a taunt line. 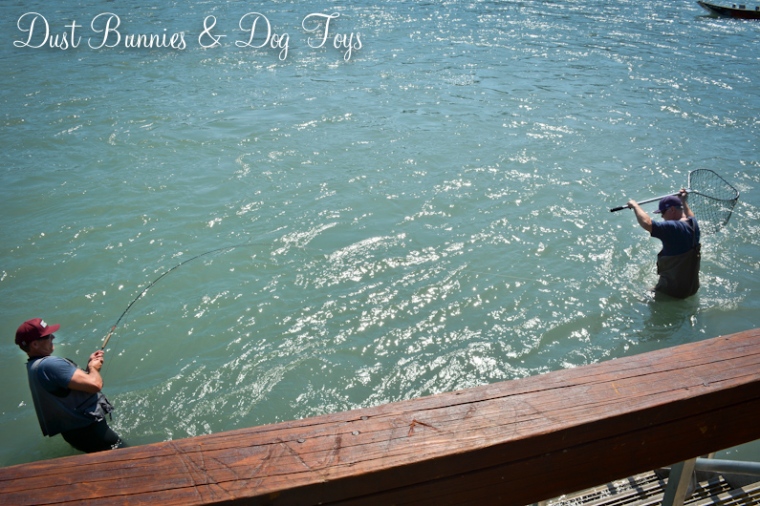 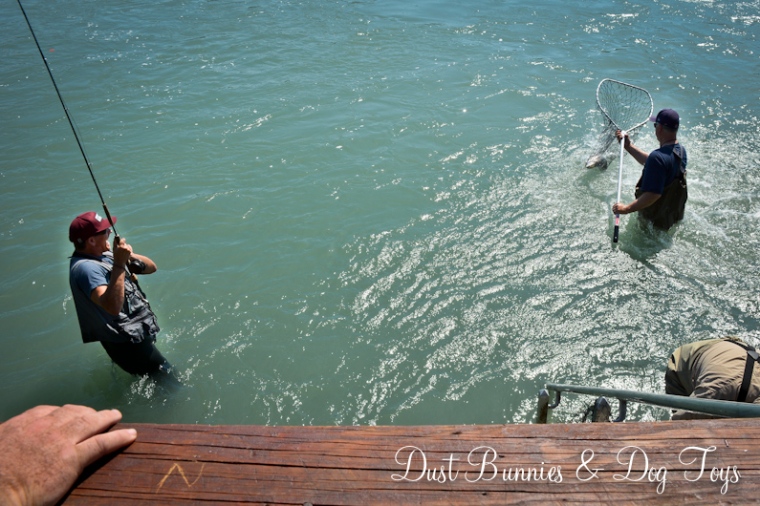 As the day wore on the other fishermen in the area left to go home for dinner so we soon had the area to ourselves and it was just our group in the water. 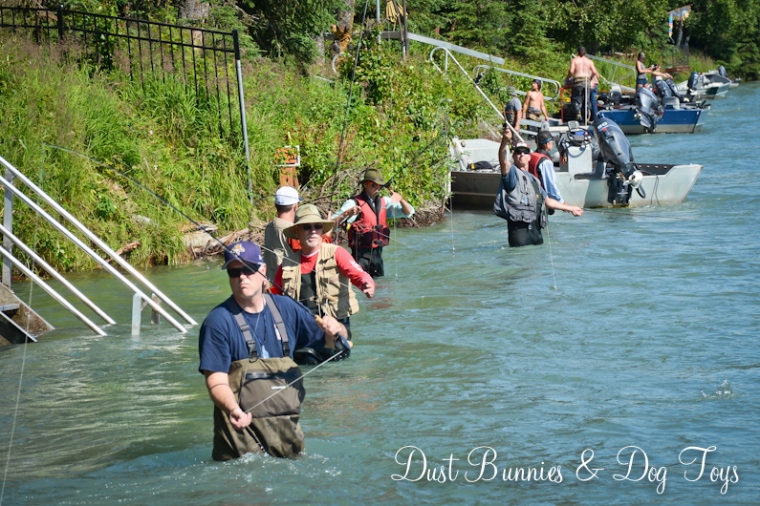 Another friend of the cousins’ stopped by to chat and ended up running the net for them several times. 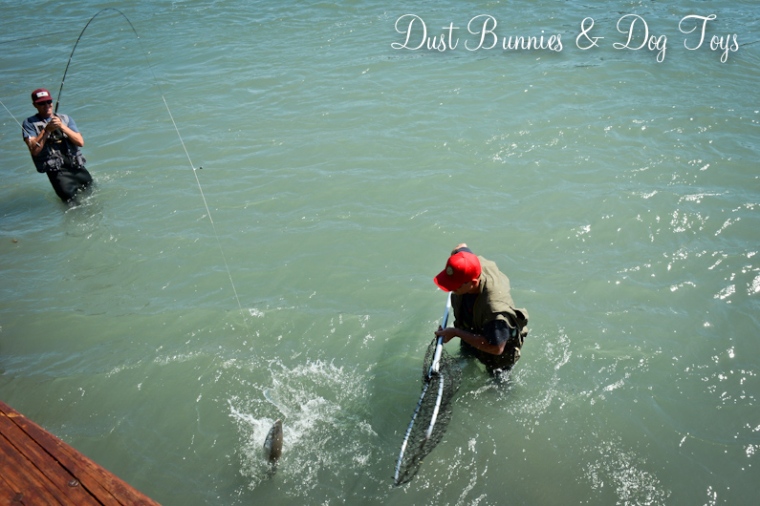 It seemed their luck had turned and they were all happy to show off their handiwork as a team. 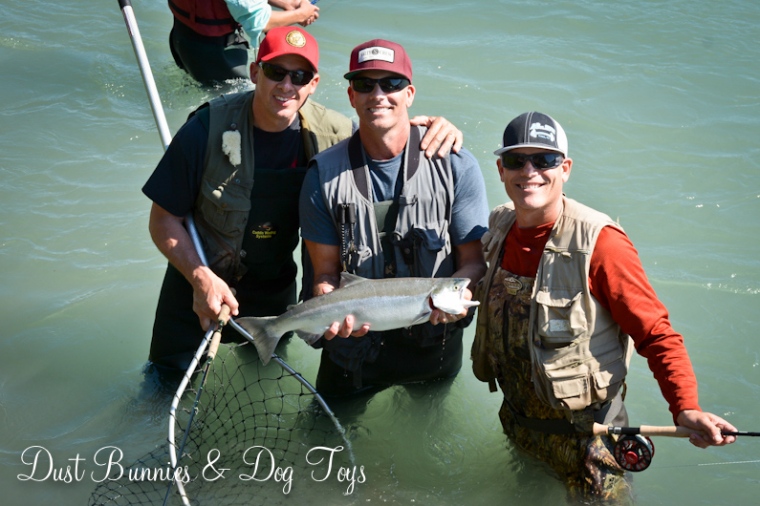 The Hubs and I had to head out to make the 4+ hour drive back home for the work-week, but we left the guys to fish under Alaska’s midnight sun and share more stories – or create new ones.  Several of them will head back to the lower 48 this week, but we’ll see them again next year when they return.

The Hubs will head back down this weekend to join those still here in the river and catch fish of our own, so hopefully soon our freezer will be well stocked for the colder months to come. 🙂