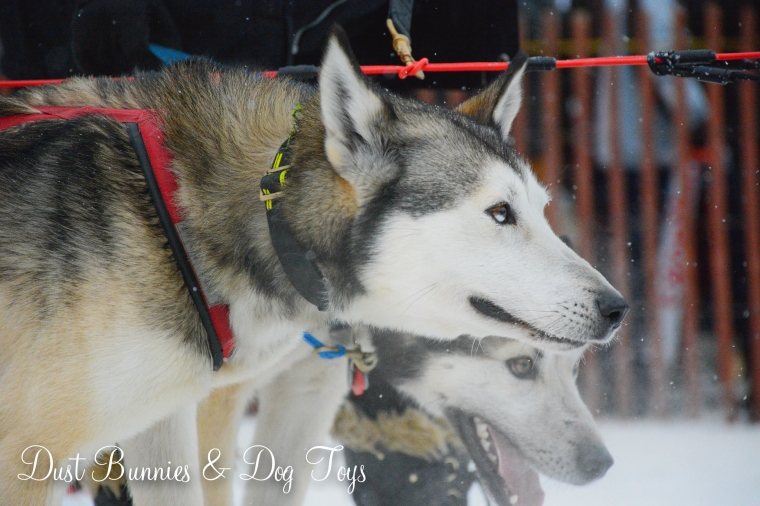 The 2018 Iditarod began this past weekend and I got to be right in the midst of it!  Known as “The Last Great Race” it celebrates the teams who organized during the 1925 diphtheria epidemic to rush serum to Nome to save lives.

The company I work for is a sponsor and had a tent near the starting line where we were doing give aways.  The area we were in required an access badge and when I was able to take breaks from working at the tent I could go into the ‘chute’ where the teams were staged right behind the start line.   The teams would line up on the street to await their turn to begin the race. 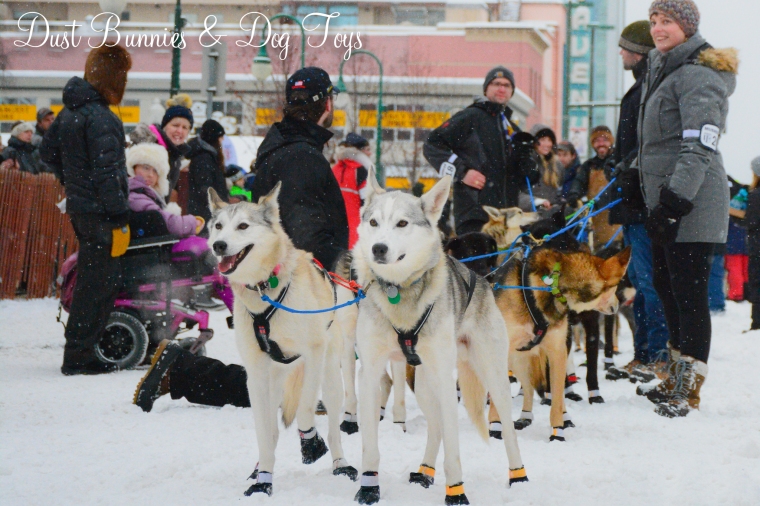 Several of the mushers led their teams in from the front, rather than riding in on the sled. 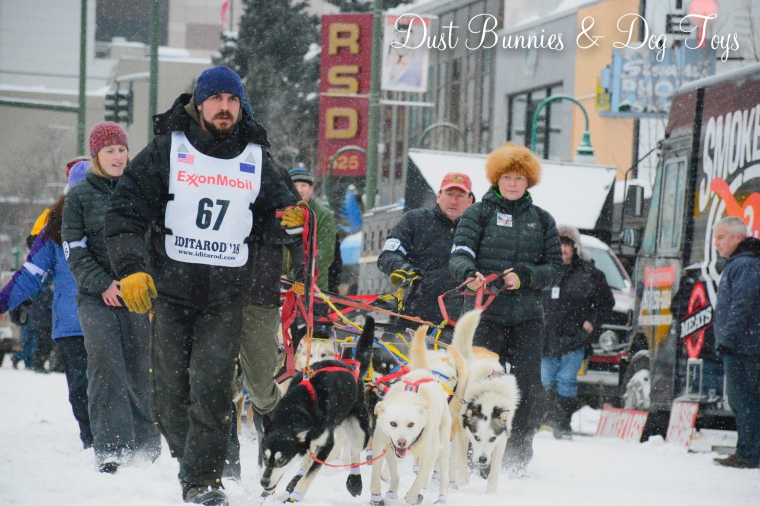 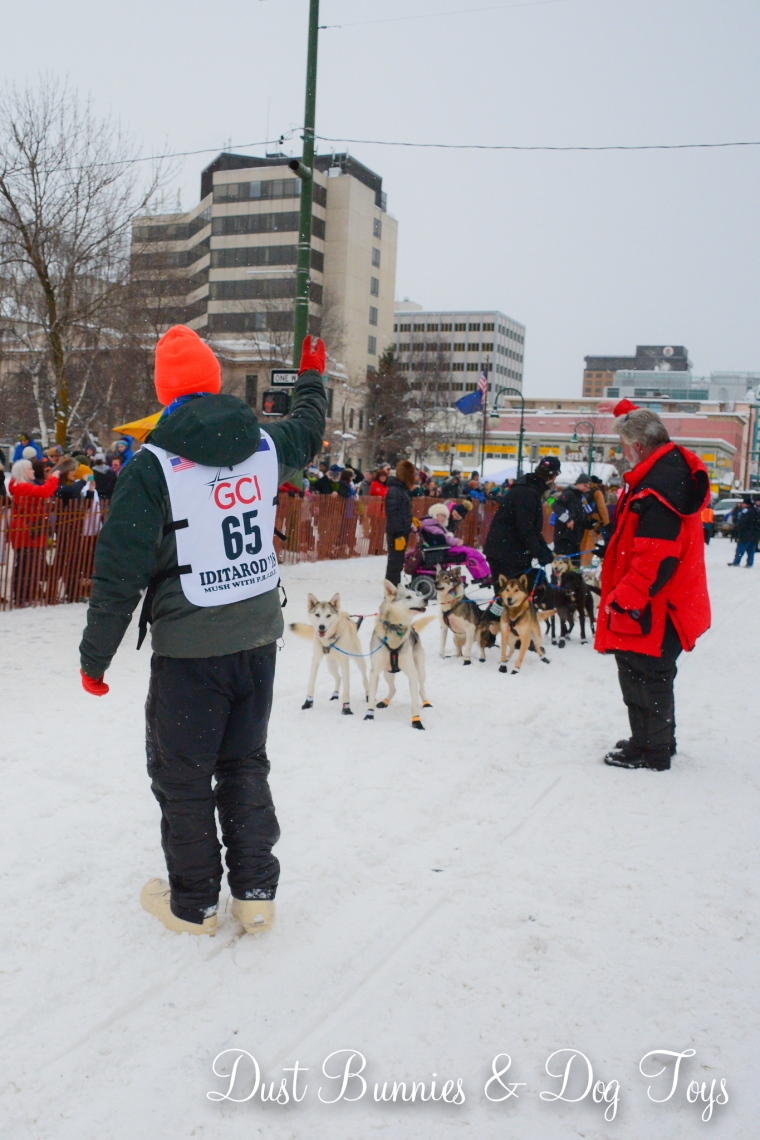 Then they’d check over their team and equipment to ensure everything was as it should be. 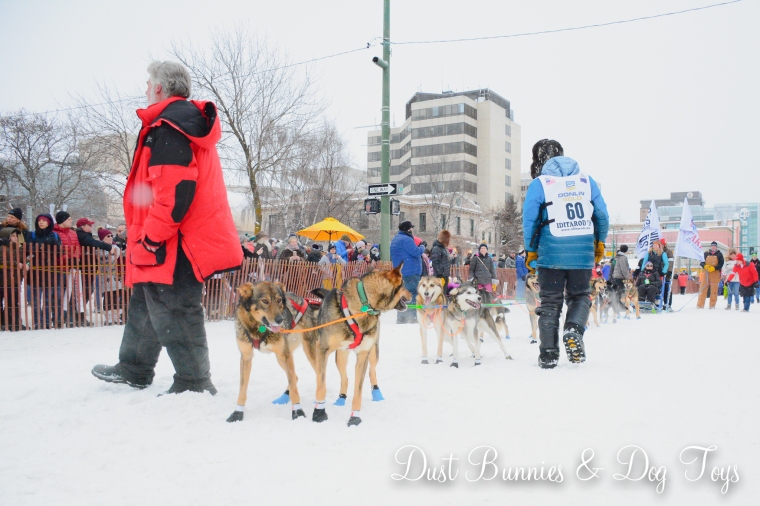 And a few would stop to have conversations with their dogs, pose for photos for fans and enjoy the moment with their family members who were nearby to cheer them on. 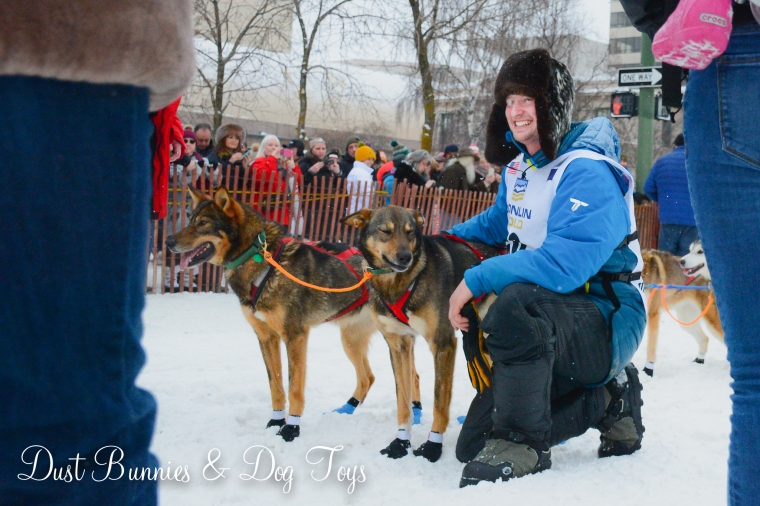 Each team had a group of handlers to help guide the dogs into position.  Sled dogs are born and trained to run, so they are VERY high energy and once they are in the harness they have a single mind focus.  It takes several people to keep them in position as they move up through the staging lanes.  It’s also helpful to signal down the line in all the celebration so the mushers or helpers on the sled know when to set the brake and release it as the line moves. 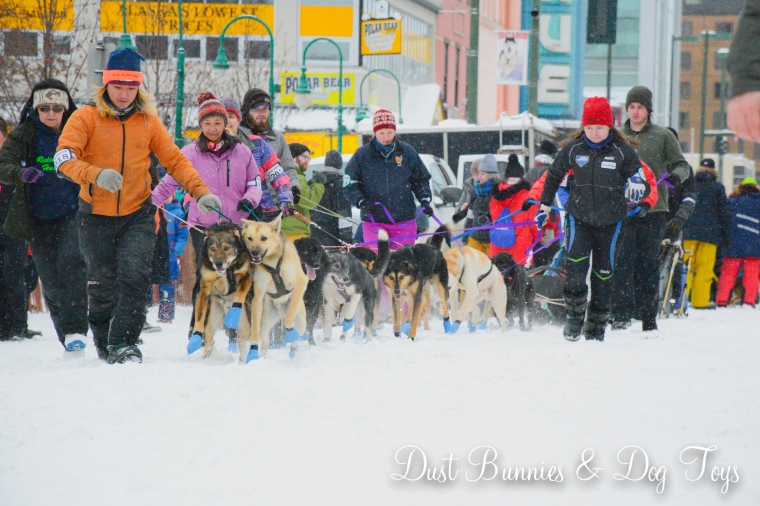 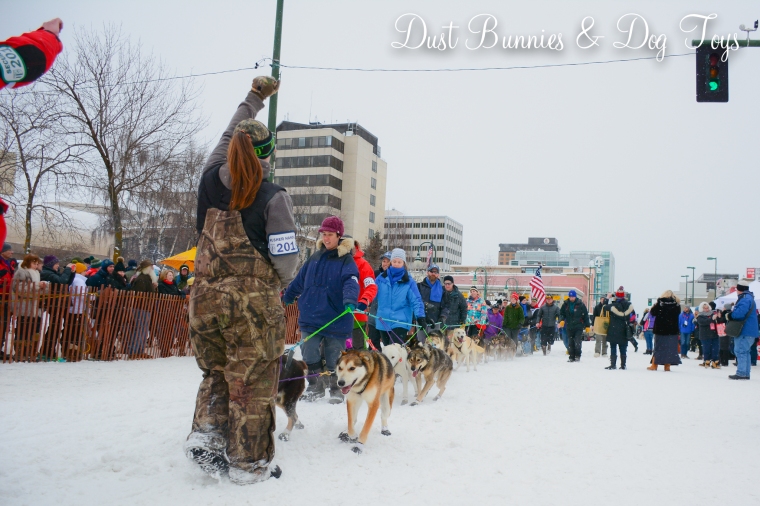 Many of these handlers have worked with the mushers for months prior to the race and know the dogs personally.  That familiarity can be a calming aspect for the dogs as they anticipate the start of the race.

And of course a few rubs while they wait are always welcome too! 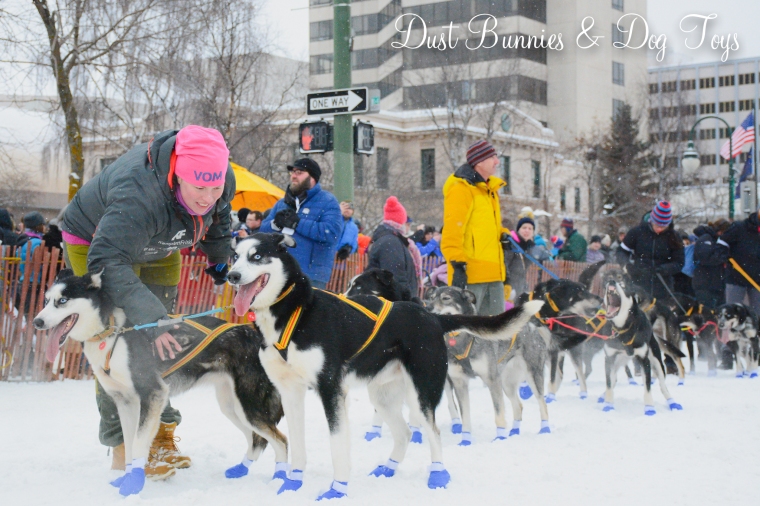 And some just want a hug before they hit the course. 🙂  One of the mushers is a correctional officer when not running the trail and several of his handlers had a fun message on the back of their gear that said “You think your job is tough?  Correctional officers run the Iditarod to relax.” 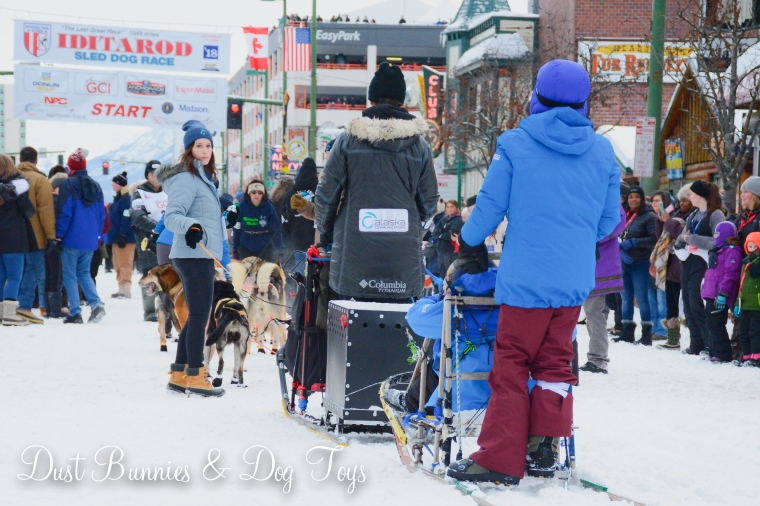 The anticipation gets heavy and the dogs get louder with excitement as the iconic start line comes into view.  At this point of the race every musher has an Iditarider on their sled.  Usually this person has won the opportunity to ride the ceremonial start in a contest or charity auction.  The money raised is used to offset expenses of the race and provides each musher who finishes the race after the top 20 – who receive cash prize winnings – with $1,049 to help get their teams home. 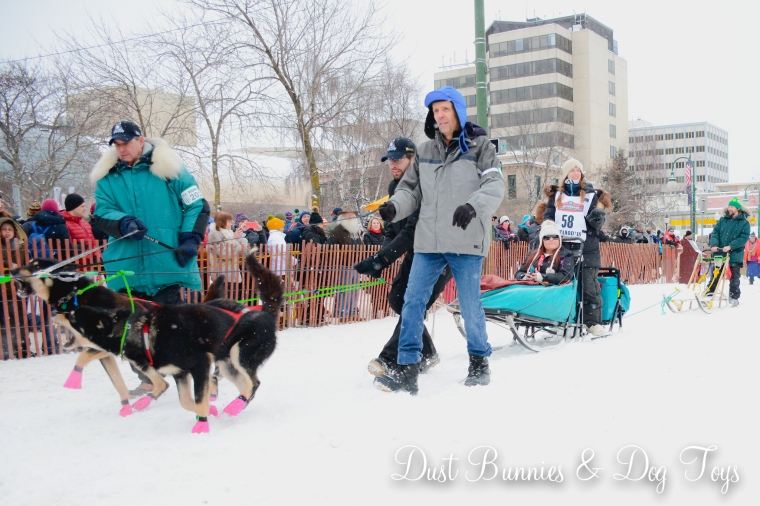 There is also a secondary sled, or “drag sled” behind each team’s main sled.  This extra sled is meant to slow down the dogs because they are so excited to run and the course is lined with spectators and this helps keep everyone safe.  Each sled is configured differently based on how that musher likes to carry on the trail.  The dogs are so ready to run that they literally jump up and down while waiting for their turn at the starting line.

And often look back at the sled as if to say “Why aren’t we going?!”

While the dogs may not enjoy the waiting it does provide a perfect opportunity to get some closeup shots of them and their expressions.  Each has their own unique coloring and personalities.  Some are young and just waiting on the signal to go, while others are veterans and have a calm but alert stance. 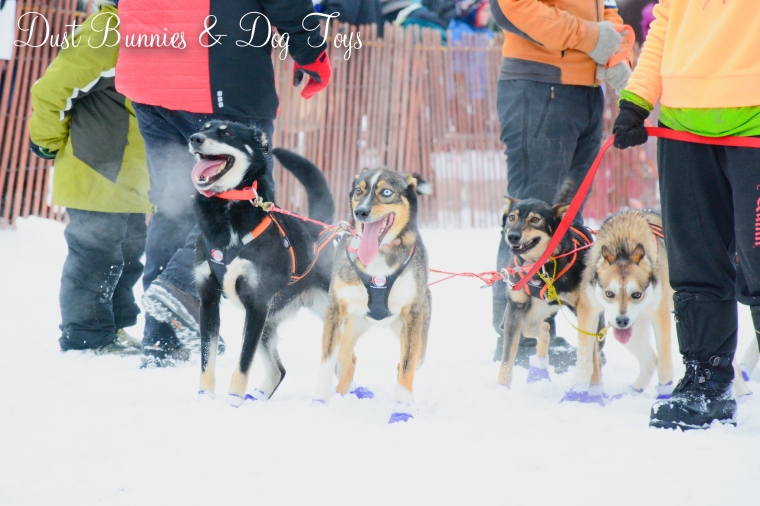 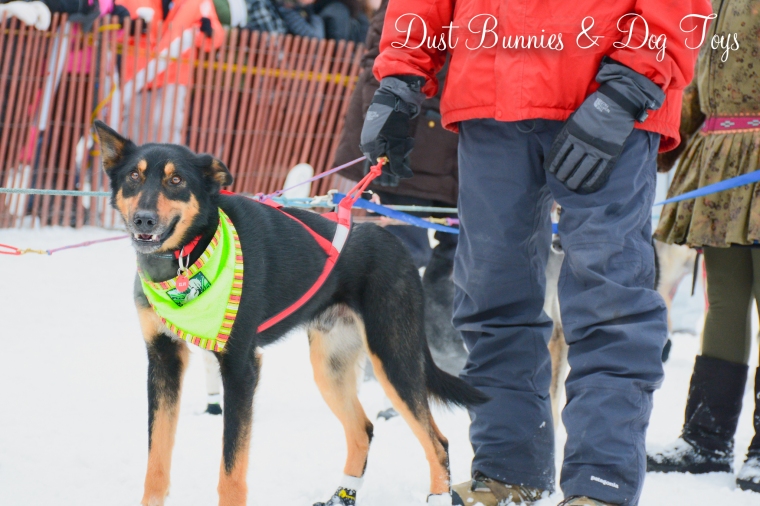 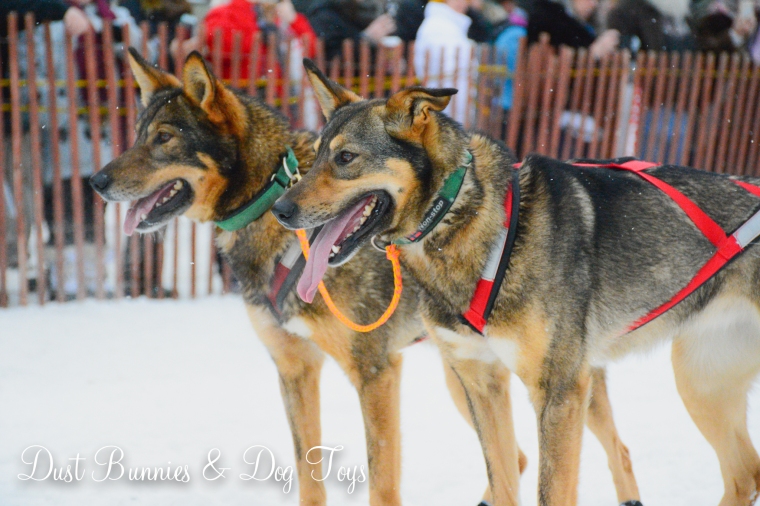 Some were so eager to get going that they were jumping over each other to trade sides because they couldn’t move forward!

And some were providing a touch of reassurance to their team mate. 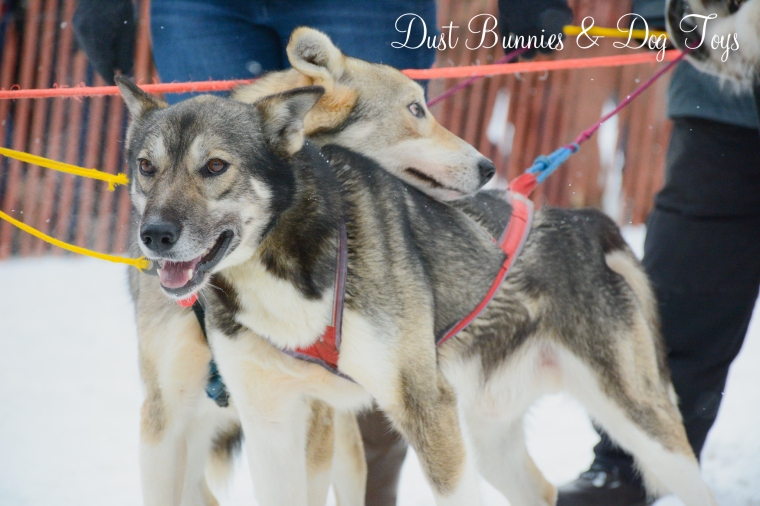 And then the announcer would say it’s time and they would be off!  The musher waves to the fans, with their Iditarider aboard for a once in a lifetime experience and the dogs do what they love to do. 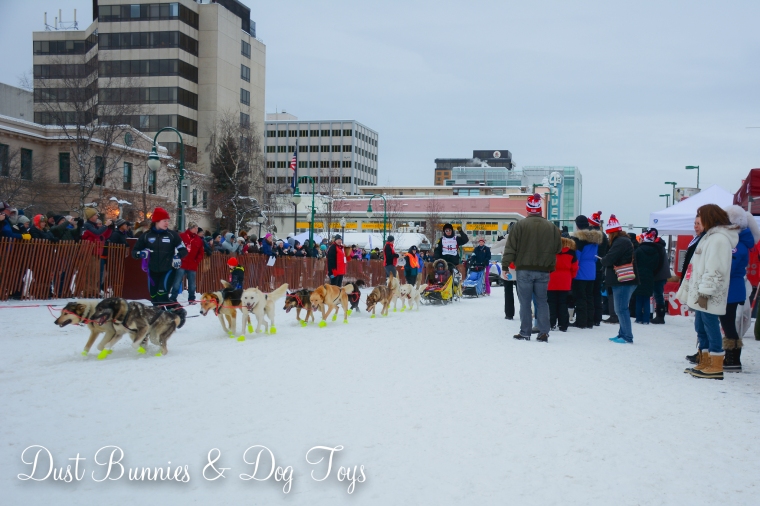 The teams run 11 miles through Anchorage for the ceremonial start with fans along many stretches of those trails to cheer them on.  The next day, they restart the race in Willow, about an hour and a half away.  This is when they begin the full trek to Nome and their race times officially start.  I got to go to that portion of the race as well and will share that tomorrow!  In the meantime, visit the Iditarod website to learn more about the race and the mushers competing this year. 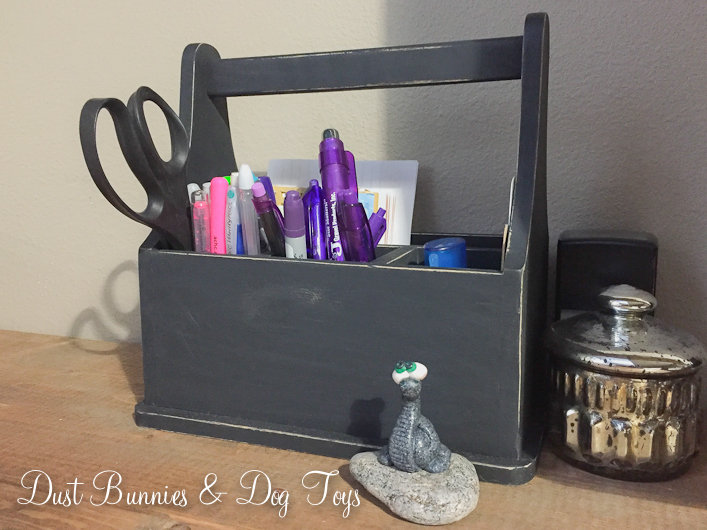 Hey everyone, the beginning of the year has been quite busy!  I had dental surgery on the 2nd that required a few days of recuperation and I was promoted at work to a new position that requires learning several new systems, but I still have to handle some things from my old position until it’s filled.  I took a little bit of time over the weekend to do a few small projects in between cleaning house and editing client photos.  Today I’m sharing the first of those with you – my new desk organizer caddy!

Here’s how this little cutie started out.  I spotted it at the thrift store well over a year ago and knew the simple design would work for some type of organizing in our house – especially when the price tag was only a couple of dollars!

I gave the whole piece a light sanding so the paint would adhere, and then used spray paint we had on hand.  Once it was dry I distressed the edges and sides to give it a bit of texture.  A quick coat of paint and it’s got tons of farmhouse style.  Even Mrs. Joanna Gaines would probably like this one. 🙂 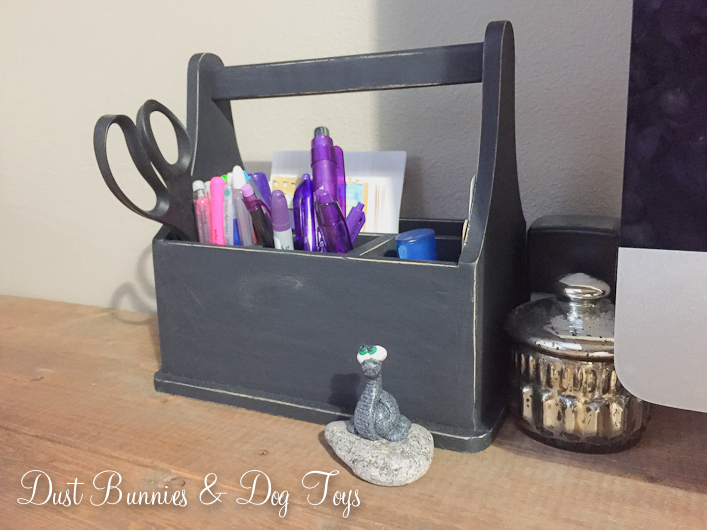 Here is is in place and all loaded up.  I put note pads in the back slot and divided up my pens and markers into to of the front sections, while the third hold the other miscellaneous items I like to keep on hand.

Every time I look at it now, I think “That was so simple.  Why didn’t I do this sooner?”  Truth be told I had to live with it for a while to make sure it would work in this spot plus decide what color I wanted it to be and then life just got busy with other priorities.  Luckily I had other spray painting to do so it was the perfect time to get this one done.

The best part of it all is that this little upgrade didn’t cost me a cent!  Since I already had the caddy, spray paint and sand paper all on hand the only cost was my time.  That’s a great way to start off DIY in 2018.  Here’s to hoping all my projects this year go this easy and have as great of a result!