In my post last week I mentioned that 2018 started with a big change for me at work.  I’ve been promoted to a new position within the same department and as part of that transition I got to move to a bigger desk.  I had decorated a bit at my old desk, but the space was awkward and limited so I didn’t do much beyond organizing my office supplies.  The new desk has much more room and is a bit more private so I had a lot more to work with.

Here’s how the space looked just before I moved over.  It was a total blank slate.  And here’s how it looks now! 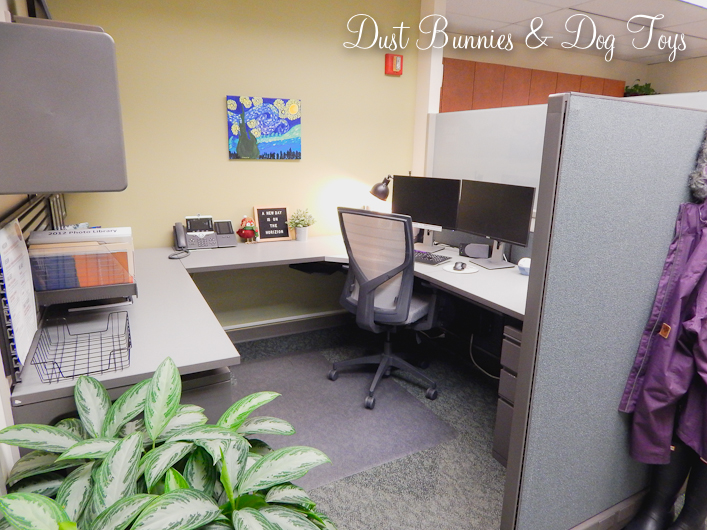 It’s still a cubicle, but it’s cozy.  And since I spend a big chunk of time here every week I’m glad that it makes me comfortable and reflects my style.  Things started with a plan to organize my office supplies.  I’d picked up some pieces from the Joanna Gaines spring line at Target, but they ended up not working out for what I wanted.  So I went the old DIY route.  I had this little metal caddy for a while.  I picked it up from the Target dollar zone probably 2 summers ago for use out on the deck, but it never left the cabinet since it came home so it needed a new purpose.  It was just the right size and layout to store my note pads, pens and markers.  But I wasn’t crazy about the color in this space when I tested it out with my other supplies. 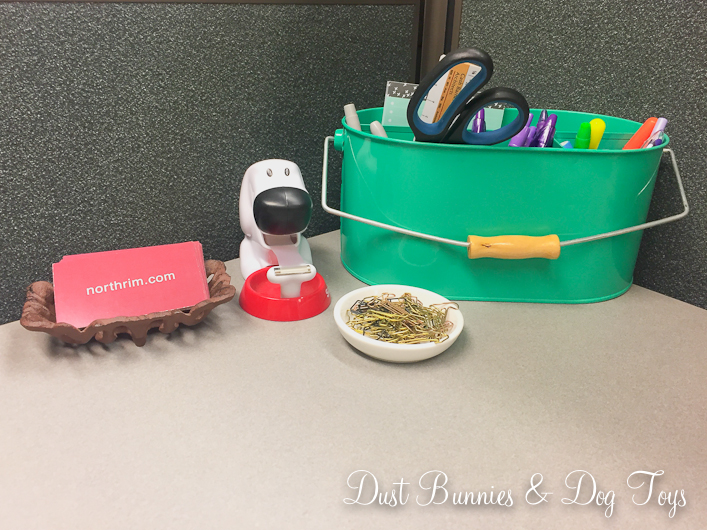 So I did what any good DIYer does, I broke out the spray paint for another desk caddy revamp.  My first thought was white, and I had a can of chalk paint in the garage.  I taped off the handle to protect it and got to spraying.  It took several coats to cover the teal color and once it did, I wasn’t loving it.

So I dug in the paint cabinet again and found black.  It’s my new go-to farmhouse style color and I figured it would work well with the frames I already had at my previous desk.  There were a few spots that crackled or bubbled since the first coats were a chalk paint but in good farmhouse style it adds to the character.  Here it is finished and all loaded up.

I did keep the fun shaped paper clips from Hearth and Hand because having goat shaped paperclips is just awesome.  I had originally planned to have them in the small dish you saw above, but it was too small and they spilled out easily.  So I decided to DIY another solution.  I pulled an old small canning jar out of the cabinet – oddly the same cabinet the caddy had been stored in – and since I’d used up all the black on the caddy I painted the ring top with ORB so it coordinates.  Now it’s the perfect way to store all my cutie paper clips.

There was a little cubby area in the back corner of the desk which lent it self to being the perfect spot for all my supplies.  Here’s how I originally set it up. 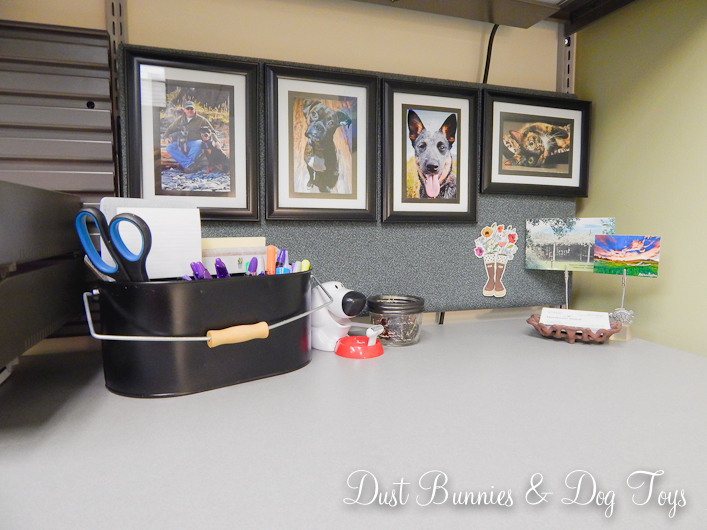 I decided to move the paper clip jar over by my business cards so it was more visually balanced and turn my little Scotch doggie tape dispenser toward the caddy.  This just felt better so I kept it this way.

I had this fun cast iron card holder from my craft show booths and since it doesn’t get use most of the year I decided to bring it in to the office so I can see it every day.  I think it was originally meant to hold bars of soap but it’s the perfect size for business cards.

I snagged a letter board on EBay for $20 with shipping and put that off to the side near the phone as you saw above.  I plan to share inspirational messages each week to help motivate our team.  I flanked the board with an IKEA plant I already had and the seasonal winter bird decor I’d gotten for each of the desks in the office back at Christmas.

I placed the lamp from my old desk in the other corner behind the monitors.  I already had the verse print from our trip to Hawaii when we visited a friend’s shop there, but I found a nice frame for it and placed the books I’m reading for professional development next to it.

If you’re wondering what’s on the other side of that big white area behind the monitors, it’s this pretty mural of a local mountain range.  It’s a nice piece of art to enjoy every time I walk toward my desk.

Above the back corner was a little shelf, where I display my awards and a faux succulent from my previous desk.  I hung my version of van Gogh’s Starry Night (my fave painting) that I did at a paint night event a while back on the back wall for a bit of color.  I also traded out the heavy wood inbox tray for the black wire one I’d brought in for my old desk, since it coordinated better with my other black accents and reduced the visual clutter a bit. 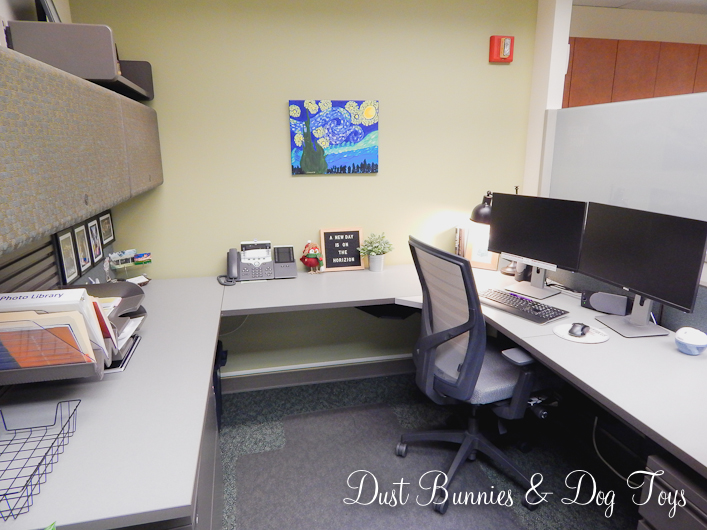 So here’s my home away from home during the week.  It’s cozy and welcoming, but still professional.  My coworkers have enjoyed seeing the space come together and now look forward to the weekly inspiration on my little message board!

I also DIYed some items for the gal filling my old position, which I’ll share soon! 🙂