Our last trip to Portland was planned around attending a large junk show similar to the one we’d gone to the previous year farther north.  This one was called Junk Bonanza.  Several of the same vendors were at this show so they were on the top of my list to check out first.  We paid a little extra for the early bird tickets so we got in before the general crowd, which means we also had first dibs on items.

The Hubs had told me that if I found something large that I wanted we could store it at my mother-in-law’s house until he could make a trip down the Alcan to pick it up in the spring.  Knowing that I had that option in the near future, I made a bee-line for B’Aase Repurposed‘s booth.  I had missed out on their super cute upcycled planters last time and was hopeful they’d have some more.  Although they didn’t have planters this time they did have this awesome bell made from a gas canister cylinder.  I knew right away it was meant to be in my yard.  We also found some cool metal fishing floats at their booth that will be used on rain chains to the rain barrels this year. 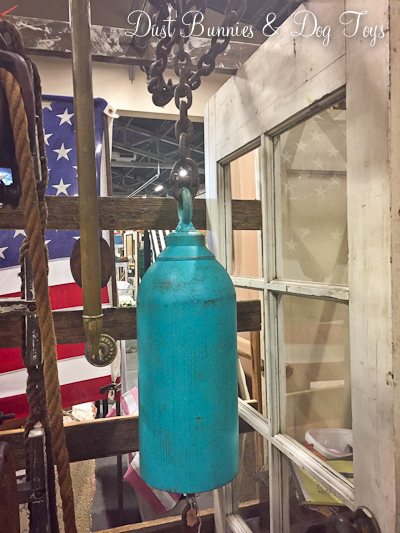 I took a peek at several other booths as I made my way to the next group on my priority list.  I really liked the large burlap webbing ottoman I spotted at this booth and may attempt to make one or two for the new deck we plan to build this summer.

Grange Industrial was my next priority stop.  I had researched them online from the vendor list and really liked their style.  They had several large pieces I pondered over, including some adorable repurposed wheelbarrow planters, but I knew I had a budget to work within and not having a spot I knew I’d use each item in I decided to pass on them.

Although it wasn’t on my priority list because they didn’t have an online site I could research them at beforehand, I just couldn’t pass the JBRO booth without browsing before the crowds arrived.  It was a wise choice because I found a garden trellis, a rake head and velvet pumpkins – just in time for fall decorating. 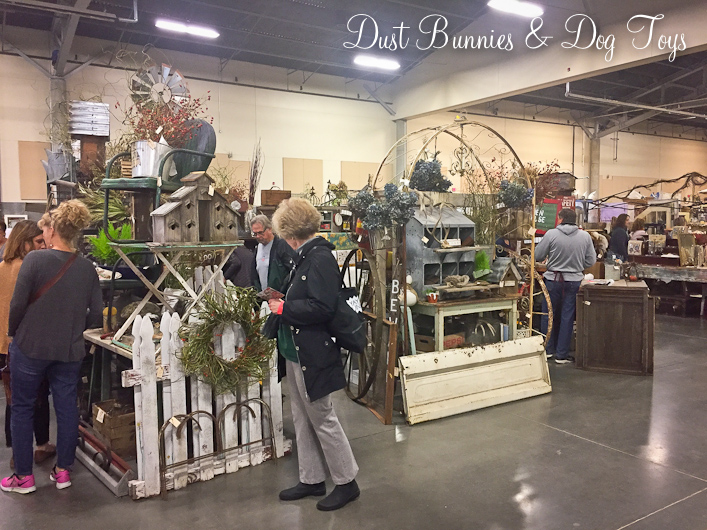 By now the general admission had started and things got a little more crowded.  I started browsing the vendors row by row and fell in love with UberChicHome‘s large display.  I was originally drawn to their grain sack pillows but the Hubs pointed out a vintage wooden cart on the corner of their booth.  The vendor said the item was on hold for another 5 minutes for someone who said they would be back for it.  We decided it was worth the wait to hang out and see if we could get it if the other person didn’t show up.  5 minute later, there was no returning customer and it was ours.  And about 2 minutes later someone else was asking to buy it as the vendor swiped my card!  The one we got is very similar to the one in the lower right corner of the photo below but nicer.  You’ll see it in a bit when I share my haul. 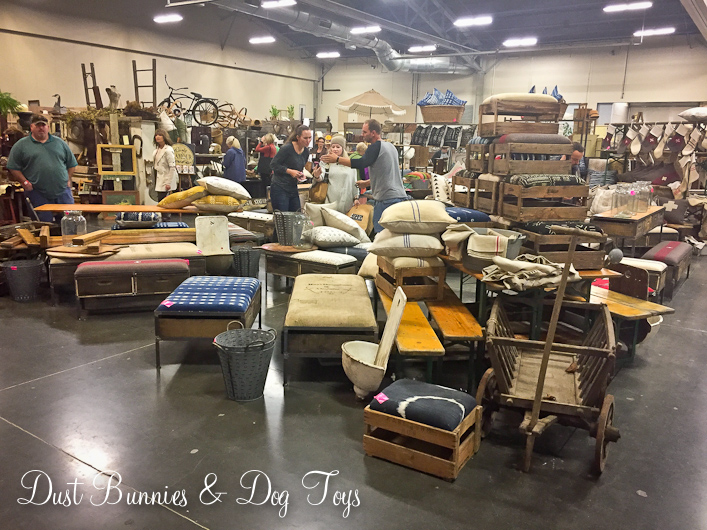 While we were waiting for the no-show customer I poked around the booth right across the aisle.  Rusty Glamour definitely had my vibe – rustic with a touch of industrial and farm house.  She had several cool pieces like those pendant lights made from old theater spot lights you see right out at the front and a vintage wheel chair. 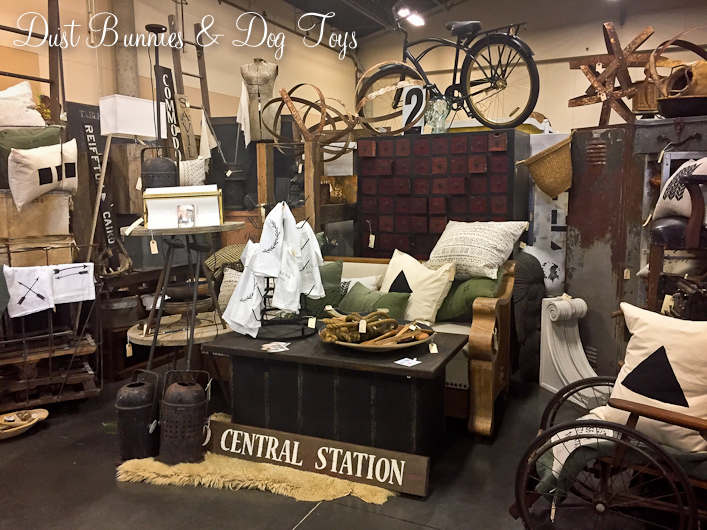 What I loved most at her booth were these awesome sea bag pillows.  They were large and I knew they’d be durable based on the material.  When I pointed them out to the hubs he reminded me that we still had his sea bag and his dad’s.  So we decided to make our own using those.  I’m hoping to get to that project in the next few months and will share it here when we do. 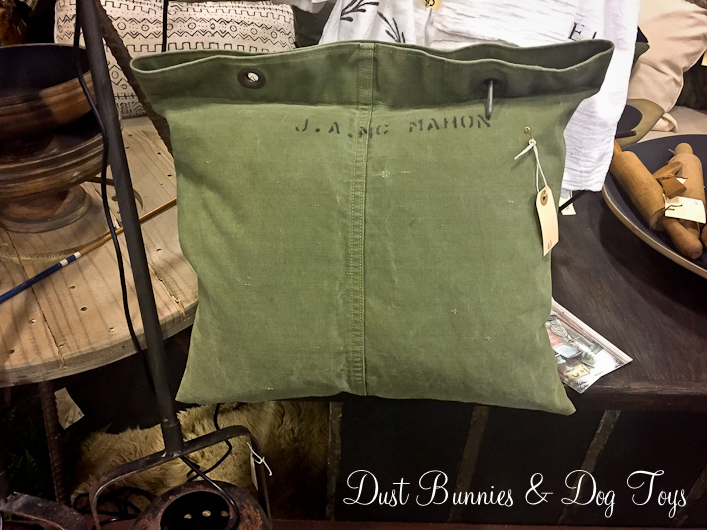 Once we had the cart paid for I ventured on to other nearby booths, including All My Favorite Things, where I found an awesome rustic bench.  I actually pondered on the bench for a few minutes because it was a great price (based on my Alaska comparisons), but I wasn’t sure if I’d use it on the deck or front porch.  Another lady heard me talking about it with the vendor and told me that if I didn’t buy it she would.  Knowing I had two possible spots to use it off the top of my head I couldn’t pass up the deal.  I also contemplated those rustic stools you see in their booth below but I didn’t have a specific spot in mind for them so I decided to let them find another home.  I found a large stoneware crock at this booth for a great price as well. 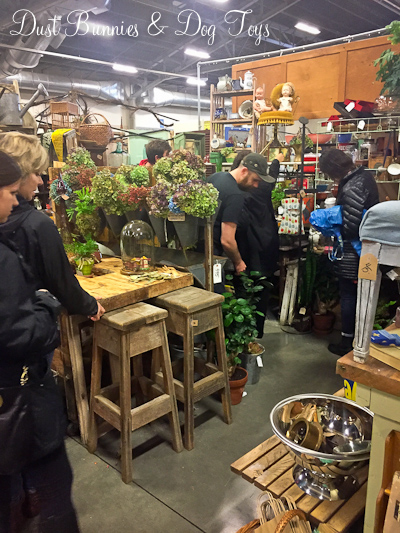 Now that I had several bigger pieces paid and on hold around the show I wandered booth to booth to see what struck my interest.  One of my favorite set-ups was this farmhouse style booth, although didn’t find any treasures that had to come home with me from there.

To give you an idea of just how big the show was, here’s a panoramic shot I took from one corner of the exhibit hall!  Good thing I wore comfortable sneakers!

I’ll show my haul from the show in just a moment, but I also wanted to share some of my favorite booths and items I spotted when we visited the Monticello Antique Marketplace in Portland during the same trip.  This was our first visit to the store and it didn’t disappoint. 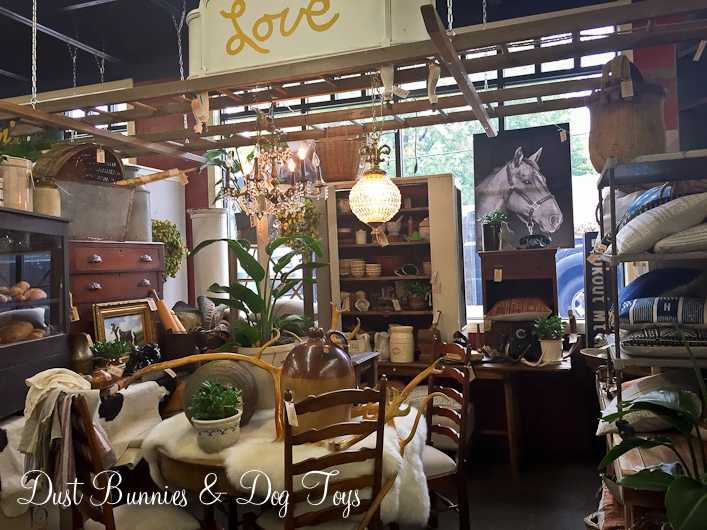 There was something about this particular booth that drew me in.  It had a perfect blend of rustic, farm house and western.  Another booth had these cool metal coil lights.  We have a couple of these in my materials stash so I may give it a try!

We came in through the side entrance where there was a little cafe, so I really enjoyed finding the main entrance with this awesome garden style display. 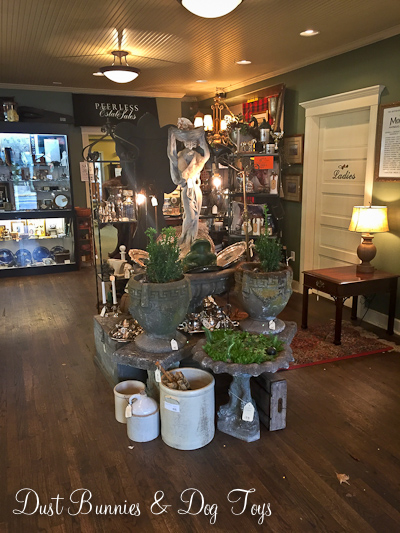 A little alcove near the entrance was decorated for Halloween – can you tell I’ve been meaning to do this post for a while?! LOL.  I loved the large undertakers sign on the back wall and may just make something similar for our mantel come this October. 😉

Ok – it’s finally time to share my haul from the Junk Bonanza show.  I didn’t get a shot of the smaller items since it was threatening to rain, here are the big items that await our return in the spring!  I can’t wait to bring them home and put them to use around the house and yard!

I love that the crock has a Portland stamp.  It will be a fun reminder of our many trips here.  And I find it interesting that it’s also a “6” like some of our others, including the one in our master bedroom.

Here’s a closer shot of the little wooden cart we scored!  This one is much nicer than the one you saw in the picture before.  It’s got removable panels for the tray of the cart and an old school reflector on the back – which is my favorite detail!  I’ve decided it’s going to live on our front porch where it will be protected from the elements but can be filled with plants or seasonal decor.  It will probably also be used for photo shoots, which should be absolutely adorable. 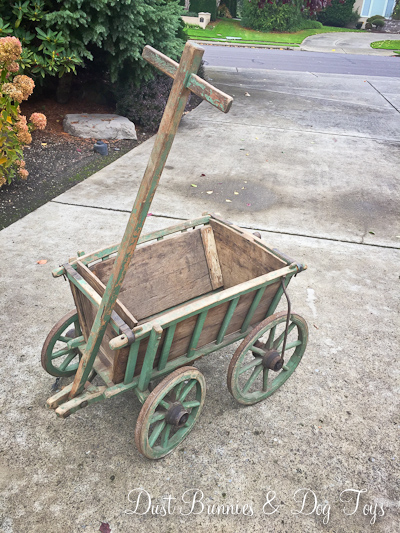 Since the Hubs is already planning to make a trip back with the truck in the coming months, I’m planning to hit several antique shops in downtown Camas, WA while we’re there as I’ve got a few things on my wish list that I’m sure will be better priced in that area.  I’d love to hear what you think of the treasures we found and ideas on how you would use them!

2 thoughts on “Junkin’ in Portland”