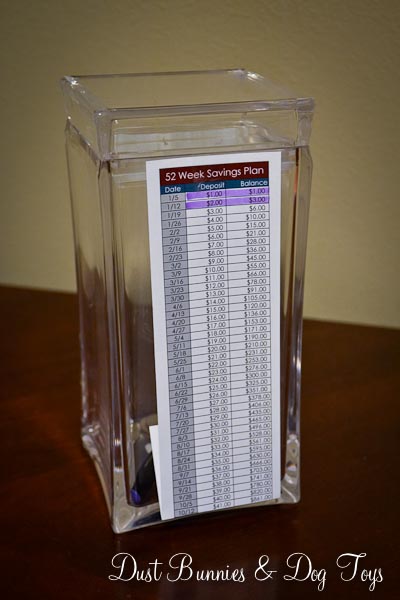 Around this time last year the hubs suggested we try the 52 Week Savings Plan he’d seen online. The idea is pretty simple, the first week you put $1 into your designated savings container and then increase that amount by a dollar each week. If you stick with it, you’ll have $1,378 at the end of the year.

We decided to both take the challenge, which would give us just over $2,700 in savings. Not a bad thing to have as a home owner. I appropriated some clear jars I had laying around, printed two of the weekly savings chart and attached one to each jar. It was pretty easy in the beginning since the amounts were so minimal, but as we headed into the last third of the year and the amounts were increasing it became a little more difficult.

Most of the dollars in my jar came from selling items we no longer needed or wanted on local online buy/sell pages as we settled into our new home.  It was a win-win, less clutter in our house and a few dollars in savings.  I will admit that both jars were raided on a few occasions when “life” happened and we needed cash for something. Thanks to my photography clients, my jar recuperated but the hub’s jar never did.  Luckily, my jar’s balance covered Christmas shopping for our family with enough left over to open a new savings account.

We’ve decided to give it a try again this year because it’s good to build a habit of saving, even if it takes a few attempts.  I’ve read several financial gurus’ opinions both for and against the idea. Some suggest doing the plan in reverse, starting week one with $52 and decreasing the amount by $1 each week to make it more rewarding. Others suggest using an automatic transfer to a savings account rather than having the cash sitting around.  Both are good ideas but for now we’ll stick with the original and keep it simple.  Both jars already have their first dollar in them for this week and mine has $2 more for next week thanks to another online sale, so we’re starting out on a good note.

Have you done the 52 Week Savings Challenge?  Tell me about it.  Did it help you create a habit of saving that continued and how did you use the balance at the end?