Sometimes it takes a few tries to find something just right. That was certainly true when it came to finding the perfect case for my iPad. I loved the purple case I showed you just after I started this blog, but one night I was tucking it away next to the headboard of our bed and some of the keys came off the keyboard! I tried desperately to reattach them, but they just stuck to my fingers the next time I tried typing.

I spotted a similar style for sale on the local buy-sell page for just $10 and quickly bought it as a replacement. It was still new in the box, but it was basic black. And the more I used it the more I realized it just didn’t work well for me. The fold out for the keyboard was difficult to use, I couldn’t switch up the direction the iPad sat due to the flaps that covered ‘non-button’ areas and the grooves to hold the screen at an angle didn’t grip so unless I was sitting totally still it would often slide down.

Then a coworker showed me the keyboard cover she’s just bought and let me test out the different features. Not only was it purple, it had magnetic contact points that were secure but still easy to remove. I was sold.

She said she found it on Amazon for half the price she’d seen it elsewhere so that’s exactly where I went. At checkout I was asked if I wanted to use reward points on my credit card to pay for the purchase. Um, yes! And I got free 2nd day air for trying Amazon Prime. I think that’s fate saying I was supposed to have this. 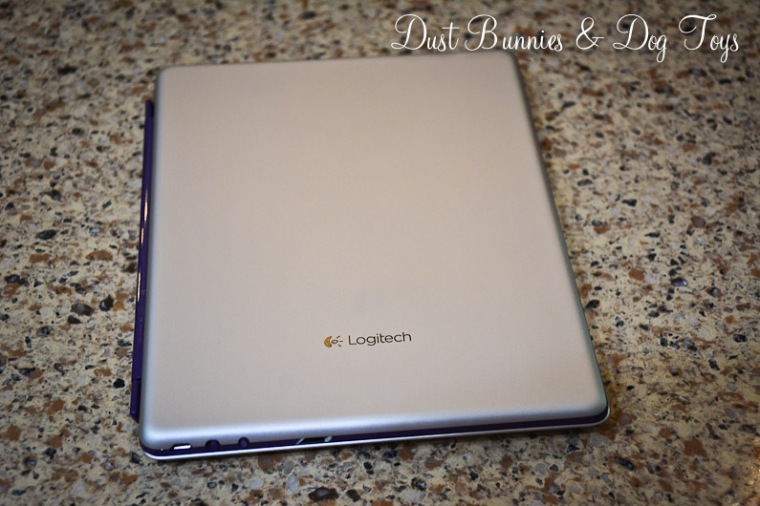 Since the keyboard just covers the screen I wanted to find a way to protect the back of the iPad. Then I remembered that my company had iPad sleeves as a promo item! And because our marketing department is super awesome (hint, hint, wink, wink) it didn’t have a big gaudy logo on it. Instead we have a fun catch phrase and artwork.

I was able to sell the old case for what I’d paid, so my only financial investment is the minimal price I paid for the original purple case. How’s that for savvy shopping?! 🙂