The hubs and I had discussed getting a cat again after moving into the new house.  He wanted a Siamese like his mom’s Honey Baby, but I’m partial to calicos since that’s what I’ve always had.  There was no firm plan on when it would happen.  Instead I figured it would happen organically, at the right time.  Apparently that time has come.  Last week we saw a post on a buy/sell page from a lady looking to rehome two cats, one being an adorable calico.  I chatted with her back and forth about the cat confirming she was litter box trained, friendly and not prone to destroy furniture.  The lady seemed to think that she’d do ok with dogs, so we set up a time to meet Luna this weekend.

She wasn’t sure about us ‘strangers’ at first, but once we hung out a bit, she started purring and let us hold her.  We chatted with the lady a bit about her and decided to bring her home.  Unfortunately, it was the hub’s last night shift before he starts his new job next week, so he had to leave and go to work, while I drove everyone home.  Two dogs and a new cat in the same car for an hour…. yeah.. that was.. interesting.  We put the dogs in the bed of the truck, which they were NOT excited about and per the lady’s suggestion left Luna loose in the cab on her harness and leash.  She did ok while we were traveling under 40, but as soon as we picked up speed she voiced her concerns.  I finally got her to come snuggle in my lap or next to me on the console where she seemed to quite down.  Of course the two whining pups in the back window were none to happy to watch some kitty get the attention they normally do!

Once home, I let Luna free in the house to explore.  The dogs immediately wanted to greet her and get to know her.  Let’s just say she wanted NONE of that.  She hissed.  She even growled.  And then she hid behind a large box in the spare room, refusing to come out.  After a few hours I figured she was getting hungry and in need of a litter box, so I picked her out of her hiding spot and took her to the laundry room where I’d set up her litter box and food.  She soon realized she could get on top of the washer and dryer from the window ledge where her food is and has since taken up residence there.  I go in and check on her every so often and the dogs follow me in hopes that their new housemate will be ready to play.

This is the resulting scene.  Two mugs looking up with “please come play with us” faces only to receive the look saying “not in a million years” from above.  LOL 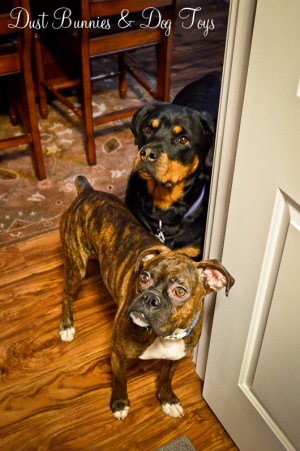 She’s super sweet with me, purring and wanting to cuddle whenever I’m near.  It’s just those active doggies she’s not ready to interact with.  I’m sure they will work it out eventually, which means Luna will dictate when she wants them to be near her and when she doesn’t.  And perhaps one day in the not so distant future there will be a kitty at the head of the ‘treat’ attention line. 🙂